SOLD OUT: TRAVELS WITH GEORGE Nathaniel Philbrick with Pieter Roos 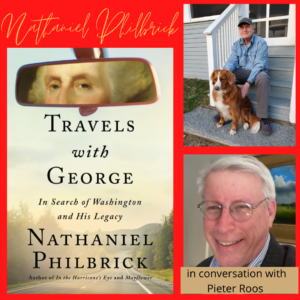 A can’t miss event for history buffs! The Mark Twain House & Museum welcomes guests back for this IN-PERSON author event with bestselling author and historian Nathaniel Philbrick in conversation with MTH&M Executive Director Pieter Roos! Tuesday, October 5 at 7pm EDT, Philbrick and Woodward will discuss Philbrick’s newest book, TRAVELS WITH GEORGE: In Search of Washington and His Legacy. THIS EVENT IS SOLD OUT.

PLEASE NOTE COVID SAFETY PROTOCOLS FOR THIS IN-PERSON EVENT BELOW.

Does George Washington still matter? Bestselling author Nathaniel Philbrick argues for Washington’s unique contribution to the forging of America by retracing his journey as a new president through all thirteen former colonies, which were now an unsure nation. Travels with George marks a new first-person voice for Philbrick, weaving history and personal reflection into a single narrative.

In the fall of 2018, Nathaniel Philbrick embarked on his own journey into what Washington called “the infant woody country” to see for himself what America had become in the 229 years since. Writing in a thoughtful first person about his own adventures with his wife Melissa and their dog Dora, Philbrick follows Washington’s presidential excursions: from Mount Vernon to the new capital in New York; a month-long tour of Connecticut, Massachusetts, New Hampshire, and Rhode Island; a venture onto Long Island and eventually across Georgia, South Carolina, and North Carolina. The narrative moves smoothly between the eighteenth and twenty-first centuries as we see the country through both Washington’s and Philbrick’s eyes.

COVID SAFETY PROTOCOLS: Please note for this event, we will be requiring guests to provide proof of vaccination or a a negative COVID test and to wear a mask throughout the program.

Masks are required for all patrons regardless of vaccination status and must cover the mouth  and nose except while eating or drinking in lobby spaces. Food and drinks will NOT be allowed in the theatre. If a patron does not have an acceptable mask, a mask will be provided.

Nathaniel Philbrick was born in Boston, Massachusetts, and grew up in Pittsburgh, Pennsylvania, where he attended Linden Elementary School and Taylor Allderdice High School.  He earned a BA in English from Brown University and an MA in America Literature from Duke University, where he was a James B. Duke Fellow. He was Brown University’s first Intercollegiate All-American sailor in 1978, the same year he won the Sunfish North Americans in Barrington, RI. After working as an editor at Sailing World magazine, he wrote and edited several books about sailing, including The Passionate Sailor, Second Wind, and Yaahting: A Parody.

In 1986, Philbrick moved to Nantucket with his wife Melissa and their two children.  In 1994, he published his first book about the island’s history, Away Off Shore, followed in 1998 by a study of the Nantucket’s native legacy, Abram’s Eyes. He was the founding director of Nantucket’s Egan Maritime Institute and is a research fellow at the Nantucket Historical Association.

In 2000, Philbrick published the New York Times bestseller, In the Heart of the Sea, which won the National Book Award for nonfiction. The book was the basis of the 2015 movie of the same title directed by Ron Howard.  The book also inspired a 2001 Dateline special on NBC as well as the 2010 PBS American Experience film “Into the Deep” by Ric Burns. In 2019, the National Endowment for the Arts added the book to their ever-growing library of 32 titles in the NEA Big Read program under which libraries and non-profits can apply for grants in order to develop in-depth, community-wide programming around a common book.

His next book Sea of Glory was published in 2003 and won the Theodore and Franklin D. Roosevelt Naval History Prize and the Albion-Monroe Award from the National Maritime Historical Society.

The New York Times bestseller Mayflower was a finalist for both the 2007 Pulitzer Prize in History and the Los Angeles Times Book Award, won the Massachusetts Book Award for nonfiction, and was named one the ten “Best Books of 2006” by the New York Times Book Review. In June 2020, Penguin will publish an updated trade paperback edition with a new Preface to coincide with the 400th anniversary of the Mayflower’s arrival in Plymouth Harbor.

In 2010, he published the New York Times bestseller The Last Stand, which was named a New York Times Notable book, a 2010 Montana Book Award Honor Book, and a 2011 ALA Notable Book.  Philbrick was an on-camera consultant to the 2-hour PBS American Experience film “Custer’s Last Stand” by Stephen Ives.

In 2011 Philbrick’s Why Read Moby-Dick? was a finalist for the New England Society Book Award and was named to the 2012 Listen List for Outstanding Audiobook Narration from the Reference and User Services Association, a division of the ALA.  That year Penguin also published a new edition of his first work of history, Away Off Shore.

In 2013 Philbrick published the New York Times bestseller, Bunker Hill:  A City, a Siege, a Revolution, which was awarded both the 2013 New England Book Award for Non-Fiction and the 2014 New England Society Book Award as well as the 2014 Distinguished Book Award of the Society of Colonial Wars.

In March 2018, Penguin published a new edition of his sailing memoir Second Wind: A Sunfish Sailor, an Island, and the Voyage that Brought a Family Together.  Later that year Philbrick published the New York Times bestseller, In the Hurricane’s Eye:  The Genius of George Washington and the Victory at Yorktown, a finalist for the George Washington Book prize and the winner of the Commodore John Barry Book Award for American Maritime Literature.

Philbrick’s writing has appeared in Vanity Fair, The New York Times Book Review, The Wall Street Journal, the Los Angeles Times, and The Boston Globe. He has appeared on the Today Show, the Morning Show, Dateline, PBS’s American Experience, C-SPAN, and NPR. He and his wife Melissa still live on Nantucket.