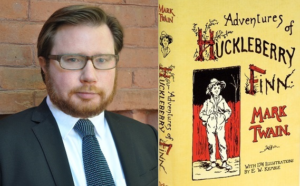 James Golden, director of education at The Mark Twain House & Museum, will give a talk about Mark Twain’s masterpiece Adventures of Huckleberry Finn at the West Hartford Public Library, 20 South Main Street, on Wednesday, January 23, from 6:30 to 8 p.m. The event is free and open to the public.

Twain’s 1885 novel, which he wrote when he lived in Hartford, is simultaneously acknowledged as a masterpiece of American Literature and banned from schools.

Golden will explore the book in the context of American history, beginning with the origins and growth of slavery, the Civil War, Reconstruction, the Civil Rights movement through to the present. The program examines the role of this book as a catalyst for positive social change and includes a discussion of book banning and censorship.

Register for the talk at West Hartford Public Library here.