JEFFERY DEAVER on THE MIDNIGHT LOCK with Steve Berry 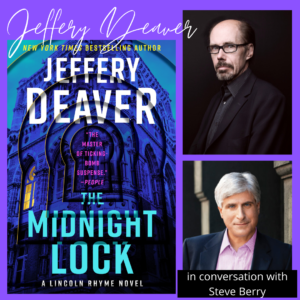 The “master of ticking-bomb suspense” Jeffery Deaver’s latest thriller features his most beloved protagonists Lincoln Rhyme and Amelia Sachs as they search for a criminal whose fascination with breaking locks terrorizes New York City.

A woman awakes in the morning to find that someone has picked her apartment’s apparently impregnable door lock and, terrifyingly, rearranged personal items, even sitting beside her while she slept. The intrusion, the police learn, is a message to the entire city of carnage and death to come. Lincoln Rhyme and Amelia Sachs are brought in to investigate and soon learn that the brilliant, sociopathic intruder, who calls himself “The Locksmith,” can break through any lock or security system ever devised. With more victims on the horizon, Rhyme, Sachs and their stable of associates have to try to follow the evidence to the man’s lair… and discover what his true mission might be.

The Midnight Lock is, like all of Deaver’s novels, a roller coaster that takes place over just a few days’ time, features surprise after surprise and offers a fascinating look at the esoteric world of locks and lockpicking.

FREE virtual event, although donations are gratefully accepted. REGISTER HERE.
Copies of The Midnight Lock signed by the author are available for purchase through the Mark Twain Store; proceeds benefit The Mark Twain House & Museum. Books will be shipped after the event. We regret that we are NOT able to ship books outside the United States as it is cost-prohibitive to do so.
——————-

Jeffery Deaver is an international number-one bestselling author. His novels have appeared on bestseller lists around the world. His books are sold in 150 countries and translated into over twenty-five languages. He has served two terms as president of Mystery Writers of America, and was recently named a Grand Master of MWA, whose ranks include Agatha Christie, Ellery Queen, Mary Higgins Clark and Walter Mosely. The author of over forty novels, three collections of short stories and a nonfiction law book, and a lyricist of a country-western album, he’s received or been shortlisted for dozens of awards. His “The Bodies Left Behind” was named Novel of the Year by the International Thriller Writers association, and his Lincoln Rhyme thriller The Broken Window and a stand-alone, Edge, were also nominated for that prize. The Garden of Beasts won the Steel Dagger from the Crime Writers Association in England. He’s also been nominated for eight Edgar Awards by the MWA.Deaver has been honored with the Lifetime Achievement Award by the Bouchercon World Mystery Convention, the Strand Magazine’s Lifetime Achievement Award and the Raymond Chandler Lifetime Achievement Award in Italy. His book A Maiden’s Grave was made into an HBO movie starring James Garner and Marlee Matlin, and his novel The Bone Collector was a feature release from Universal Pictures, starring Denzel Washington and Angelina Jolie. Lifetime aired an adaptation of his The Devil’s Teardrop. NBC television recently aired the nine-episode prime-time series, Lincoln Rhyme: Hunt for the Bone Collector.

Steve Berry is the New York Times and #1 internationally bestselling author of fifteen Cotton Malone adventures, four stand-alone thrillers, and several works of short fiction. His books have been translated into 41 languages with 25,000,000 copies in 52 countries. They consistently appear in the top echelon of The New York Times, USA Today, and Indie bestseller lists. History lies at the heart of every Steve Berry novel. It’s his passion, one he shares with his wife, Elizabeth, which led them to create History Matters, a foundation dedicated to historic preservation. Since 2009 Steve and Elizabeth have crossed the country to save endangered historic treasures, raising money via lectures, receptions, galas, luncheons, dinners and their popular writers’ workshops. To date, 3,500 students have attended those workshops and nearly a million dollars raised. Steve’s devotion to historic preservation was recognized by the American Library Association, which named Steve it’s spokesperson for National Preservation Week. Among his other honors are the Royden B. Davis Distinguished Author Award; the Barnes & Noble Writers for Writers Award given by Poets & Writers; the Anne Frank Human Writes Award; and the Silver Bullet, bestowed by International Thriller Writers for his philanthropic work. He has been chosen both the Florida and Georgia Writer of the Year. He’s also an emeritus member of the Smithsonian Libraries Advisory Board. In 2010, a NPR survey named The Templar Legacy one of the top 100 thrillers ever written. Steve was born and raised in Georgia, graduating from the Walter F. George School of Law at Mercer University. He was a trial lawyer for 30 years and held elective office for 14 of those years. He is a founding member of International Thriller Writers—a group of nearly 6,000 thriller writers from around the world—and served three years as its co-president.