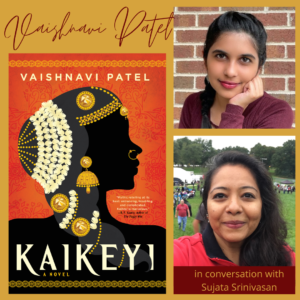 The Mark Twain House & Museum is delighted to present Vaishnavi Patel on her mesmerizing debut, KAIKEYI. Join Vaishnavi  and award-winning journalist Sujata Srinivasan to discuss this powerful reimagining of the life of the infamous queen from the Indian epic the Ramayana.

“I was born on the full moon under an auspicious constellation, the holiest of positions—much good it did me.” So begins Kaikeyi’s story. The only daughter of the kingdom of Kekaya, she is raised on tales of the gods: how they churned the vast ocean to obtain the nectar of immortality, how they vanquish evil and ensure the land of Bharat prospers, and how they offer powerful boons to the devout and the wise. Yet she watches as her father unceremoniously banishes her mother, listens as her own worth is reduced to how great a marriage alliance she can secure. And when she calls upon the gods for help, they never seem to hear. Desperate for some measure of independence, she turns to the texts she once read with her mother and discovers a magic that is hers alone. With this power, Kaikeyi transforms herself from an overlooked princess into a warrior, diplomat, and most favored queen, determined to carve a better world for herself and the women around her. But as the evil from her childhood stories threatens the cosmic order, the path she has forged clashes with the destiny the gods have chosen for her family. And Kaikeyi must decide if resistance is worth the destruction it will wreak—and what legacy she intends to leave behind.

KAIKEYI weaves a tale of fate, family, courage, and heartbreak—and an extraordinary woman determined to leave her mark in a world where gods and men dictate the shape of things to come.

Copies of KAIKEYI signed by the author are available for purchase through the Mark Twain Store; proceeds benefit The Mark Twain House & Museum. Books will be shipped after the event. We regret that we are NOT able to ship books outside the United States as it is cost-prohibitive to do so.

Vaishnavi Patel is a law student focusing on constitutional law and civil rights. She likes to write at the intersection of Indian myth, feminism, and anti-colonialism. Her short stories can be found in The Dark and 87 Bedford’s Historical Fantasy Anthology along with a forthcoming story in Helios Quarterly. Vaishnavi grew up in and around Chicago, and in her spare time, enjoys activities that are almost stereotypically Midwestern: knitting, ice skating, drinking hot chocolate, and making hotdish.

Sujata Srinivasan is Editor, News, and Senior Producer for Where We Live at Connecticut Public Radio. She is the author of an audio book titled “Mark Twain for Kids” in the American Biography Series produced by Columbia River Entertainment. In her spare time, Sujata enjoys holding literacy and art workshops for children, painting, bicycling with her family, and playing with her rescue dog Panju Muttai.