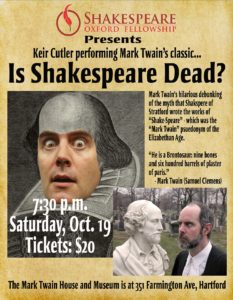 In Is Shakespeare Dead?, Mark Twain’s writes a hilarious debunking of the myth that William Shakespeare wrote the works of Shakespeare. Listing the handful of established facts of Shakespeare’s life, Twain ridicules the fantasy that a largely uneducated youth could have wandered into London and, with virtually none of the necessary skills, become the greatest author in English literature.

Keir Cutler adapted Twain’s “Is Shakespeare Dead?” because he feels people should at least be aware of the case that can be made against Shakespeare from Stratford.

What is ignored by people in general, and academics in particular, is the breadth of Shakespeare’s knowledge of law, philosophy, classical literature, ancient and modern history, mathematics, music, medicine, art, astronomy, military and naval terminology, English, French and Italian court life, and especially his comprehension of multiple languages. Shakespeare added hundreds of new words to the English language: all these words culled from other languages, both ancient and modern. And Shakespeare did all this without leaving a single trace of his skill? Nothing? No play, no poem, no letter in his own hand? And no mention of any writing is his long and detailed will?