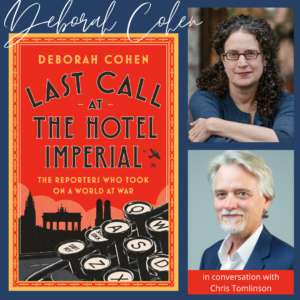 They were an astonishing group: glamorous, gutsy, and irreverent to the bone. As cub reporters in the 1920s, they roamed across a war-ravaged world, sometimes perched atop mules on wooden saddles, sometimes gliding through countries in the splendor of a first-class sleeper car. While empires collapsed and fledgling democracies faltered, they chased deposed empresses, international financiers, and Balkan gun-runners, and then knocked back doubles late into the night.

Last Call at the Hotel Imperial is the extraordinary story of John Gunther, H. R. Knickerbocker, Vincent Sheean, and Dorothy Thompson. In those tumultuous years, they landed exclusive interviews with Hitler and Mussolini, Nehru and Gandhi, and helped shape what Americans knew about the world. Alongside these backstage glimpses into the halls of power, they left another equally incredible set of records. Living in the heady afterglow of Freud, they subjected themselves to frank, critical scrutiny and argued about love, war, sex, death, and everything in between.

Plunged into successive global crises, Gunther, Knickerbocker, Sheean, and Thompson could no longer separate themselves from the turmoil that surrounded them. To tell that story, they broke long-standing taboos. From their circle came not just the first modern account of illness in Gunther’s Death Be Not Proud—a memoir about his son’s death from cancer—but the first no-holds-barred chronicle of a marriage: Sheean’s Dorothy and Red, about Thompson’s fractious relationship with Sinclair Lewis.

Told with the immediacy of a conversation overheard, this revelatory book captures how the global upheavals of the twentieth century felt up close.

Copies of LAST CALL AT THE HOTEL IMPERIAL signed by the author are available for purchase through the Mark Twain Store; proceeds benefit The Mark Twain House & Museum. Books will be shipped after the event. We regret that we are NOT able to ship books outside the United States as it is cost-prohibitive to do so.

Her interests run the methodological gamut, from social science-inspired comparative history to biography.  Trained as a modern Europeanist (with specialties in Germany and Great Britain) she has recently published on Anglo-Argentines, the history of family capitalism, and on American foreign correspondents.  Although her subjects have varied, a few thematic interests run through: state and society, the public histories of private lives, and material culture.

Cohen has held fellowships from the Mellon Foundation, the National Humanities Center, the Cullman Center for Scholars and Writers at the New York Public Library, the American Council of Learned Societies (Frederick Burkhardt Fellowship for Recently Tenured Scholars), and the John Simon Guggenheim Memorial Foundation. She was awarded the Clarence ver Steeg Faculty Award by Northwestern for her work with graduate students and the Charles Deering McCormick Professorship (2015-2018) for excellence in teaching.

Cohen writes regularly for the Atlantic on subjects ranging from war photography to punk rock and has reviewed for the New York Review of Books, the London Review of Books, and The Wall Street Journal.

Chris Tomlinson is the business columnist for the Houston Chronicle, focusing on energy, business and policy. Until April 2014, he was the supervisory correspondent for The Associated Press in Austin, responsible for state government and political reporting in Texas.

From 2007-2009, he was an international investigative reporter for the AP working in Iraq, Austin and Washington DC. He served as the AP’s East Africa bureau chief in Nairobi, Kenya from 2004 to 2007 and was responsible for text, photo and television coverage from 14 countries. He was appointed East Africa correspondent in 2000 and before that served two years as an international editor at AP’s headquarters in New York from 1998-2000. He started with the AP in 1995 as the Central Africa correspondent based in Rwanda. Tomlinson covered the 1994 elections that ended Apartheid in South Africa for The Asahi Shimbun, a Japanese newspaper.

Shortly after the 9/11 terror attacks, the AP assigned Tomlinson to work from the USS Theodore Roosevelt aircraft carrier and later to cover operations in Afghanistan, including the Battle of Tora Bora. During the invasion of Iraq in 2003, the AP chose Tomlinson as their lead embedded reporter and he has spent two years in Iraq since then. Tomlinson has also reported from conflicts in Uganda, Burundi, Congo, Sudan and Somalia. Before becoming a journalist, he spent seven years in the U.S. Army. He graduated from the University of Texas at Austin in 1992 with special honors in humanities.