LET ME BE FRANK: A Book About Women Who Dressed Like Men To Do Shit They Weren’t Supposed to Do 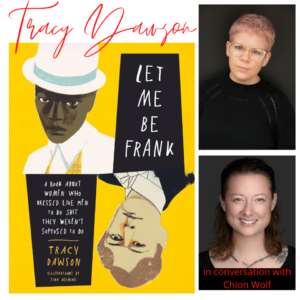 “A smart, funny journey through history that introduces us to the rule breakers who made history worth traveling through.”—Patton Oswalt

“I came up with Tracy as a fellow sketch comedian on the vomit-soaked stages of the Toronto comedy scene. And like the brilliant, resourceful, rule-breaking, damn-well-stubborn sisters in Let Me Be Frank, Tracy is someone who gets the job done, and gets it done well.”—Samantha Bee

Writer, actor, and feminist Tracy Dawson joins Chion Wolf, the host of WNPR’s Audacious and The MTH&M’s The Mouth Off, to discuss trailblazers throughout history who disguised themselves as men and continuously broke the rules to gain access and opportunities denied them because they were women.

LET ME BE FRANK illuminates with a wry warmth the incredible stories of a diverse group of women from different ethnicities and cultural backgrounds who have defied the patriarchy, refusing to allow men or the status quo to define their lives or break their spirit. An often sardonic and thoroughly impassioned homage to female ingenuity and tenacity, the women profiled in this inspiring anthology broke the rules to reach their goals and refused to take “no” for an answer. These women took matters into their own hands, dressing—sometimes literally, sometimes figuratively—as men to do what they wanted to do. This includes competing in marathons, publishing books, escaping enslavement, practicing medicine, tunneling deep in the earth as miners, taking to the seas as pirates and serving on the frontlines in the military, among many other pursuits. Not only did these women persist, many unknowingly made history and ultimately inspired later generations in doing so. This compendium is an informative and enthralling celebration of these revolutionary badasses who have changed the world and our lives.

Copies of LET ME BE FRANK signed by the author are available for purchase through the Mark Twain Store; proceeds benefit The Mark Twain House & Museum. Books will be shipped after the event. We regret that we are NOT able to ship books outside the United States as it is cost-prohibitive to do so.

Tracy Dawson began at the world renowned Second City in Toronto as one of the youngest to be invited to join the ‘mainstage’ cast. In 2009 Tracy won an emerging TV writer award at the Banff World Television festival and soon after was staffed (and subsequently cast) on the U.S./Canadian co-production, Call Me Fitz (DirecTV, HBO Canada). Tracy went on to win the Gemini Award and the Canadian Screen Award for Best Lead Comedic Actress for her work opposite Jason Priestley on FITZ.

Also in 2009, Tracy’s play, them & us, was produced by the prestigious Theatre Passe Muraille in Toronto. In 2014 Tracy was staffed on the TBS sitcom Your Family or Mine. She got to write jokes for Richard Dreyfuss and Ed Begley Jr. on that show. Ed called her a genius once. I’m just sayin’.

Chion Wolf is the host of Audacious on Connecticut Public Broadcasting. She is the winner of a 2021 Gracie Award, from the Alliance for Women in Media Foundation, for her episode, “Going Flat, or Building New Breasts: Two Women’s Post-Mastectomy Stories.” She is also a recipient of the The Advocate‘s Champions of Pride 2021 as an “unsung hero who is making inroads for LGBTQ+ people in their fields of work and in their communities every day despite the risks or challenges.” Previously, she produced and hosted The Mouth-Off – a live storytelling event at the Mark Twain House & Museum in Hartford, and a live advice show at Sea Tea Improv’s underground comedy theater, called Asking for a Friend with Chion Wolf.

Chion is an animator, and a stop-motion enthusiast. She is also on the Board of Directors for Night Fall, Inc., a yearly Hartford-based public performance with Anne Cubberly’s giant puppets, dancers, and music, and she is the founder of Pedal to the Medal, a bike ride that benefits Hartford’s non-profit, educational bicycle store, BiCi Co. Wolf is a founding member of the Hartford-based marching band, the Hartford Hot Several, where she plays the trash can bass drum. Chion is also a certified judge with the International Chili Society, and is unapologetic about her love for onions.