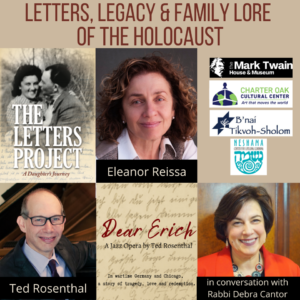 LETTERS, LEGACY & FAMILY LORE OF THE HOLOCAUST with Eleanor Reissa and Ted Rosenthal

Some of the most personal, poignant and powerful remembrances of the Holocaust can be found in the letters left behind. Director, actor and playwright Eleanor Reissa and composer and pianist Ted Rosenthal have both turned their parents’ World War II era letters respectively into a book and a jazz opera. The resulting works are both heartfelt and heartbreaking looks at the Holocaust and refugee life for the surviving Jews who fled their homes. Rabbi Debra Cantor joins Reissa and Rosenthal to discuss these deeply personal works.

In 1986, when her mother died at the age of sixty-four, Eleanor Reissa went through all of her belongings. In the back of her mother’s lingerie drawer, she found an old leather purse. Inside that purse was a wad of dried-up papers in a brittle baggie: fifty-six letters handwritten in German by her father, in 1949 — only four years after Auschwitz — to her mother, also a refugee, already living in the United States. Forty years later, Eleanor finally had the letters translated. With her father’s letters as her silent guide, Eleanor goes on a journey down the River of Time, unearthing the unknowable about her family’s past and her own present.

Dear Erich was commissioned by New York City Opera and received it’s world premiere at the Museum of Jewish Heritage in New York City and will be performed at Charter Oak Cultural Center on April 2 (link). Dear Erich was inspired by 200 newly discovered letters written in Germany between 1938 and 1941 by Herta Rosenthal to her son Erich, the composer’s father. The opera tells a refugee story for our times. Erich, a Jewish academic, escaped Nazi Germany to the U.S. shortly before Kristallnacht. The opera tells the story of a family’s dual fates. Erich’s journey to a new life in the new world – his studies, jazz and love – while the situation deteriorates in Germany and his family ultimately meets their cruel demise at the hands of the Nazis. Frustrated and powerless to help them emigrate, Erich must live with deep survivor guilt which affects him in his relationships with his wife and children.

Signed copies of THE LETTERS PROJECT are available for purchase through the Mark Twain Store; proceeds benefit The Mark Twain House & Museum. Books will be shipped after the event. We regret that we are NOT able to ship books outside the United States as it is cost-prohibitive to do so. For more information about the opera DEAR ERICH click here: www.dearerich.com. To order tickets for the April 2nd performance at Charter Oak Cultural Center, click here: https://charteroakcenter.org/event/dear-erich-a-jazz-opera-in-concert/