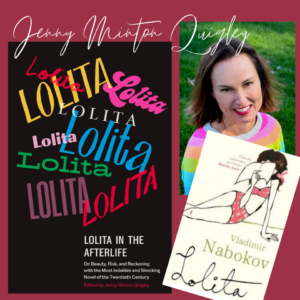 In 1958, Vladimir Nabokov’s Lolita was published in the United States to immediate controversy and bestsellerdom. More than sixty years later, this phenomenal novel generates as much buzz as it did when originally published. Central to countless issues at the forefront of our national discourse— art and politics, race and whiteness, gender and power, sexual trauma—Lolita lives on, in an afterlife as blinding as a supernova. With original contributions from a stellar cast of prominent twenty-first century writers and edited by the daughter of Lolita’s original publisher in America, Lolita in the Afterlife is a vibrant collection of sharp and essential modern pieces on this perennially provocative book.

Signed copies of Lolita in the Afterlife will be available for purchase through the Mark Twain Store; proceeds benefit The Mark Twain House & Museum. Books will be shipped after the event. We regret that we are NOT able to ship books outside the United States as it is cost-prohibitive to do so.

JENNY MINTON QUIGLEY is a writer and editor. She is the series editor forThe Best Short Stories of The Year: The O. Henry Prize Winners, and the author of a memoir, The Early Birds. She is the daughter of Walter J. Minton, the storied former president and publisher of G. P. Putnam’s Sons, who first dared to publish Lolita by Vladimir Nabokov in the United States in 1958. A former book editor at several Random House imprints, Minton Quigley lives in West Hartford, Connecticut, with her husband, sons, and dogs.