Mark My Words: Chris Frantz on “Remain in Love” 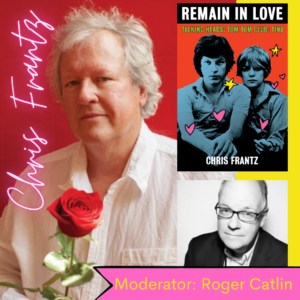 We won’t be burning down the (Twain) House, BUT we will be on a road to nowhere with this Rock ‘n Roll Hall of Famer!

Join us for an unforgettable evening with Chris Frantz, founding member of the iconic rock bands Talking Heads and Tom Tom Club, as he talks about his new memoir REMAIN IN LOVE. Chris will be joined in conversation by freelance writer Roger Catlin, former rock critic for The Hartford Courant.

One of the most dynamic groups of the ‘70s and ‘80s, Talking Heads, founded by drummer Chris Frantz, his girlfriend Tina Weymouth, and lead singer David Byrne, burst onto the music scene, playing at CBGBs, touring Europe with the Ramones, and creating hits like “Psycho Killer” and “Burning Down the House” that captured the post-baby boom generation’s intense, affectless style.

In Remain in Love, Frantz writes about the beginnings of Talking Heads—their days as art students in Providence, moving to the sparse Chrystie Street loft Frantz, Weymouth, and Byrne shared where the music that defined an era was written. With never-before-seen photos and immersive vivid detail, Frantz describes life on tour, down to the meals eaten and the clothes worn—and reveals the mechanics of a long and complicated working relationship with a mercurial frontman.

Signed copies of Remain in Love will be on sale during the event. We regret that we cannot ship outside of the U.S. at this time.

Chris Frantz is a musician, producer, and songwriter and founding member of Talking Heads and Tom Tom Club. He is a member of the Rock & Roll Hall of Fame and hosts the radio show “Chris Frantz the Talking Head” on WPKN. He and his wife Tina Weymouth live in Connecticut.

Roger Catlin wrote for the Hartford Courant for 25 years, about half that time as rock critic. He’s a freelance arts writer in Washington, D.C. where he’s written for The Washington Post, Smithsonian Magazine.com, and AARP the Magazine , along with Entertainment Weekly, TV Guide Magazine, and The Vinyl District.com, among other outlets. He writes a daily blog mostly about TV at rogercatlin.com and is a member of the TV Critics Association, Critics Choice Association and the American Theatre Critics Association.

CT Public-WNPR is the media sponsor for the Mark My Words series.