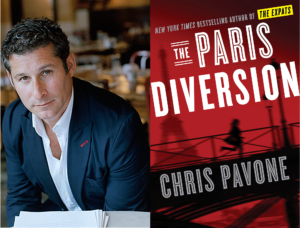 We’re creating a Paris bistro for Chris Pavone’s talk about his new thriller The Paris Diversion on Tuesday, May 21, at 7 p.m.

Enjoy a glass of wine, nibble on some cheese and crackers, and meet Chris and local mystery writer Chris Knopf in our cozy space in Mark Twain’s Carriage House.

Enter a free drawing to win three of Pavone’s previous books, The Expats, The Travelers, and The Accident.

The Paris Diversion starts off with a terrorist bombing in a busy urban neighborhood. Kate Moore, an American spy with a family and faltering career, sees a chance to get back in the game.

Pavone’s heroine Moore was introduced in The Expats, which won the 2013 Edgar Award for best first novel by an American author. Pavone says he was influenced by his experiences living in New York City during 9/11 and being in Paris in 2016, a year after the Charlie Hebdo massacre.

Admission is $25 and includes a copy of The Paris Diversion. A signing follows.

Connecticut Public-WNPR is the media sponsor for the Mark My Words series.