Join us for a night of thoughtful hilarity with special guest John Hodgman! 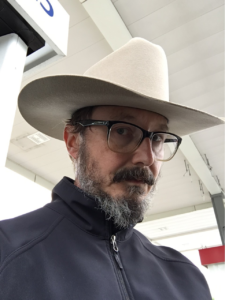 Hodgman is a writer, comedian, and actor best known for his time on The Daily Show with Jon Stewart, This American Life, HBO’s Bored to Death, and the “Mac vs. PC” series of ads for Apple computers (he was the PC).

He is the NYT-bestselling author of five books of humor, including the Thurber Prize Nominee Vacationland and his latest, Medallion Status. He’s also the host of the popular Judge John Hodgman podcast, where he settles serious disputes between real people, such as “Is a hot dog a sandwich?” and “Should we tell our children the TRUTH about Santa Claus?” He also contributes a weekly column under the same name for The New York Times Magazine. 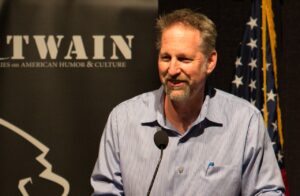 professor of English at St. Mary’s College of Maryland, director of the Twain Lecture Series on American Humor Culture, and editor of The Mark Twain Annual. He has published and given numerous lectures and scholarly papers about Mark Twain. The two will chat about all kinds of things, including, of course, Mark Twain.

Signed copies of Medallion Status and Vacationland will be available to purchase through The Mark Twain Museum Store. Proceeds benefit The Mark Twain House & Museum. We regret that we are NOT able to ship books outside the United States as it is cost-prohibitive to do so.

This is the new, virtual date for an in-person talk that had been scheduled for September 16. Tickets purchased for that date will be honored; ticket-holders will receive an e-mail explaining the details.

Tickets for this fundraiser are $35. Register here!