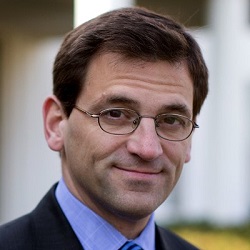 Baker will talk about presidential politics and his work on the updated edition of Obama: The Call of History with John Dankosky, Executive Editor of the New England News Collaborative, an eight-station consortium of public media newsrooms. He is also the host of NEXT, a weekly program about New England, and hosts the weekly showThe Wheelhouse, WNPR’s news roundtable program.

Baker co-wrote the first Washington Post’s story about the Bill Clinton-Monica Lewinsky scandal. He was the Post’s lead writer on the impeachment and trial of Clinton. He and his journalist wife, Susan Glasser, spent four years as Moscow bureau chiefs for the Post. In 2018 he wrote “Impeachment: An American History” with three co-authors.
His other books are Days of Fire: Bush and Cheney in the White House, The Breach: Inside the Impeachment and Trail of William Jefferson Clinton, and Kremlin Rising: Vladimir Putin’s Russia and the End of the Revolution, with Glasser, now a columnist at The New Yorker and editor at Politico. Baker and Glasser are working on a book about former Secretary of State James A Baker III.
Copies of Obama: The Call of History will be available for purchase and signing.
Tickets are $25.  Buy tickets.
The Mark My Words series is supported by the Wish You Well Foundation.
Connecticut Public-WNPR is the media sponsor for the Mark My Words series.