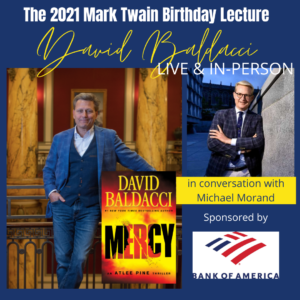 Join us  November 30th at 7PM  as we celebrate Samuel Clemens’s 186th birthday!

The Mark Twain Birthday Lecture honors our favorite writer by hosting another favorite writer to talk about his or her work, Mark Twain, and, well, anything he or she wishes to talk about! We’re thrilled that this year’s speaker is bestselling novelist David Baldacci in conversation with Yale University’s Michael Morand! Sponsored by Bank of America.

After the lecture, join us in Hal Holbrook Hall as we sing Happy Birthday to our own Sam Clemens and toast him with champagne.
Signed copies of Baldacci’s new novel MERCY will be available for purchase.
COVID SAFETY PROTOCOLS: Please note for this event, we will be requiring guests to provide proof of vaccination or a a negative COVID test and to wear a mask throughout the program.
FREE program, but registration is required. REGISTER HERE.
—————

David Baldacci has been writing since childhood, when his mother gave him a lined notebook in which to write down his stories. (Much later, when David thanked her for being the spark that ignited his writing career, she revealed that she’d given him the notebook to keep him quiet, “because every mom needs a break now and then.”)

David published his first novel, Absolute Power, in 1996. The feature film adaptation followed, with Clint Eastwood as its director and star. In total, David has published 43 novels for adults; all have been national and international bestsellers, and several have been adapted for film and television. His novels are published in over 45 languages and in more than 80 countries, with 150 million copies sold worldwide. David has also published seven novels for young readers.

A lifelong Virginian, David received his Bachelor’s degree from Virginia Commonwealth University and his law degree from the University of Virginia School of Law, after which he practiced law in Washington, D.C.

In addition to being a prolific writer, David is a devoted philanthropist, and his greatest efforts are dedicated to his family’s Wish You Well Foundation®. Established by David and his wife, Michelle, the Wish You Well Foundation supports family and adult literacy programs in the United States. In 2008 the Foundation partnered with Feeding America to launch Feeding Body & Mind, a program to address the connection between literacy, poverty and hunger. Through Feeding Body & Mind, more than 1 million new and gently used books have been collected and distributed through food banks to families in need.

David and his family live in Virginia.

Michael Morand leads communications and community engagement for the Beinecke Library and Yale Library special collections. He previously was Yale’s deputy chief communications officer and associate vice president for New Haven and state affairs. A graduate of Yale College and Divinity School, Michael has happily called Connecticut home for since coming here for school. A former New Haven alder, he currently chairs the New Haven Free Public Library Foundation and is former president of the New Haven chamber of commerce and vice president of the arts council, and has served on the State Judicial Selection Commission and the Connecticut Conference of Independent Colleges board. His late aunt, Sister Rose Martin, S.C., thought his greatest achievement was meeting David Baldacci on stage at Woolsey Hall in 2011, so Michael is thrilled to join David on stage on Farmington Avenue ten years later.

The Mark Twain Birthday Lecture is sponsored by Bank of America.