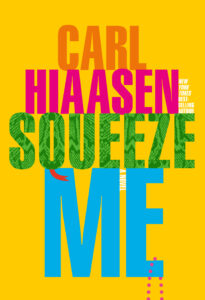 Join us for a very special evening with Carl Hiaasen, the best-selling author of Skinny Dip and Razor Girl, as he talks about his latest book Squeeze Me, a hilarious novel of social and political intrigue set against the glittering backdrop of Florida’s gold coast.

Hiaasen will be joined in conversation by restaurant critic and columnist Rand Richards Cooper.

“If you could use some wild escapism right now, Hiaasen is your guy. In its themes and its wild imagination, Squeeze Me offers some familiar pleasures, akin to a Greatest Hits collection. Anyone who’s read him will know what a prime recommendation that is . . . Angie is a tonic, as Hiaasen’s heroines tend to be,” writes Janet Maslin in The New York Times .

Carl Hiaasen was born and raised in Florida. He is the author of fourteen previous novels, including the best sellers Bad Monkey, Lucky You, Nature Girl,  Sick Puppy,  and Star Island, as well as six best-selling children’s books, Hoot, Flush, Scat, Chomp, Skink, and Squirm. His most recent work of nonfiction is Assume the Worst, a collaboration with the artist Roz Chast.

Tickets are $20. REGISTER HERE. Signed copies of Squeeze Me will be available for purchase through The Mark Twain Store; ticket and book-sale proceeds benefit The Mark Twain House & Museum. We regret that we are NOT able to ship books outside the United States as it is cost-prohibitive to do so.

CT Public-WNPR is the media sponsor for the Mark My Words series.

This event is generously supported by Bank of America.