A magnificent biography of one of the most protean creative forces in American entertainment history, a life of dazzling highs and vertiginous plunges by the acclaimed author of Pictures at a Revolution and Five Came Back 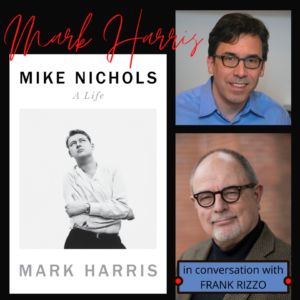 Mike Nichols burst onto the scene as a wunderkind: while still in his twenties, he was half of a hit improv duo with Elaine May that was the talk of the country. Next he directed four consecutive hit plays, won back-to-back Tonys, ushered in a new era of Hollywood moviemaking with Who’s Afraid of Virginia Woolf?, and followed it with The Graduate, which won him an Oscar and became the third-highest-grossing movie ever.

Author Mark Harris will be joined in conversation with journalist Frank Rizzo, writer for Variety, The New York Times, and longtime theatre writer for The Hartford Courant.

This program is free to attend, though when you register, we hope you’ll consider contributing what you’d call a fair ticket price. We thank you for your attendance whether you’re able todonate or not. REGISTER HERE.

Copies of Mike Nichols – A Life are available for purchase through the Mark Twain Store. Proceeds benefit The Mark Twain House & Museum. We regret that we cannot ship outside of the U.S. at this time.