MONSTER IN THE MIDDLE: Tiphanie Yanique with Dr. Christina Greer 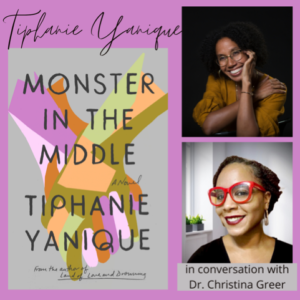 Tiphanie Yanique, the award-winning author of Land of Love and Drowning, joins Dr. Christina Greer to discuss Yanique’s electric new novel that maps the emotional inheritance of one couple newly in love.

When Fly and Stela meet in 21st Century New York City, it seems like fate. He’s a Black American musician from a mixed-religious background who knows all about heartbreak. She’s a Catholic science teacher from the Caribbean, looking for lasting love. But are they meant to be? The answer goes back decades—all the way to their parents’ earliest loves.

Vibrant and emotionally riveting, Monster in the Middle moves across decades, from the U.S. to the Virgin Islands to Ghana and back again, to show how one couple’s romance is intrinsically influenced by the family lore and love stories that preceded their own pairing. What challenges and traumas must this new couple inherit, what hopes and ambitions will keep them moving forward? Exploring desire and identity, religion and class, passion and obligation, the novel posits that in order to answer the question “who are we meant to be with?” we must first understand who we are and how we came to be.

FREE virtual program, although donations are gratefully accepted. REGISTER HERE.
Signed copies of Monster in the Middle will be available for purchase through the Mark Twain Store; proceeds benefit The Mark Twain House & Museum. Books will be shipped after the event. We regret that we are NOT able to ship books outside the United States as it is cost-prohibitive to do so.
————————
About the Author:

Tiphanie Yanique is a novelist, poet, essayist and short story writer. She is the author of the poetry collection, Wife, which won the 2016 Bocas Prize in Caribbean poetry and the United Kingdom’s 2016 Forward/Felix Dennis Prize for a First Collection. Tiphanie is also the author of the novel, Land of Love and Drowning, which won the 2014 Flaherty-Dunnan First Novel Award from the Center for Fiction, the Phillis Wheatley Award for Pan-African Literature, and the American Academy of Arts and Letters Rosenthal Family Foundation Award, and was listed by NPR as one of the Best Books of 2014. Land of Love and Drowning was also a finalist for the Orion Award in Environmental Literature and the Hurston-Wright Legacy Award. She is the author of a collection of stories, How to Escape from a Leper Colony, which won her a listing as one of the National Book Foundation’s 5Under35. Her writing has won the Bocas Award for Caribbean Fiction, the Boston Review Prize in Fiction, a Rona Jaffe Foundation Writers Award, a Pushcart Prize, a Fulbright Scholarship and an Academy of American Poet’s Prize. She has been listed by the Boston Globe as one of the sixteen cultural figures to watch out for and her writing has been published in the New York Times, Best African American Fiction, The Wall Street Journal, American Short Fiction and other places. Tiphanie is from the Virgin Islands. She grew up in the Hospital Ground neighborhood in St. Thomas. She lives now with her family in Atlanta where she is a tenured associate professor at Emory University.

About the Moderator:
Dr. Christina Greer is an Associate Professor of Political Science at Fordham University – Lincoln Center (Manhattan) campus. Her research and teaching focus on American politics, black ethnic politics, urban politics, quantitative methods, Congress, New York City and New York State politics, campaigns and elections, and public opinion. Prof. Greer’s book Black Ethnics: Race, Immigration, and the Pursuit of the American Dream (Oxford University Press) investigates the increasingly ethnically diverse black populations in the US from Africa and the Caribbean. She finds that both ethnicity and a shared racial identity matter and also affect the policy choices and preferences for black groups. Professor Greer is currently writing her second manuscript and conducting research on the history of all African Americans who have run for the executive office in the U.S. Her research interests also include mayors and public policy in urban centers. Her previous work has compared criminal activity and political responses in Boston and Baltimore. She is the host and producer of The Aftermath with Christina Greer on Ozy.com  Prof. Greer received her BA from Tufts University and her MA, MPhil, and PhD in Political Science from Columbia University.
Programs at The Mark Twain House & Museum are made possible in part by support from the Connecticut Department of Economic and Community Development, Office of the Arts, and the Greater Hartford Arts Council’s United Arts Campaign and its Travelers Arts Impact Grant program, with major support from The Travelers Foundation. For more information call 860-247-0998 or visit marktwainhouse.org.