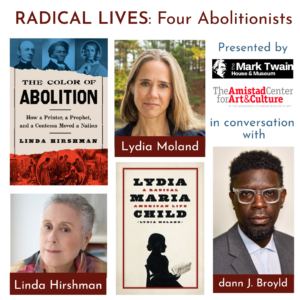 In observation of the U.N. International Day to Abolish Slavery, MTH&M and The Amistad Center for Art & Culture present a conversation on four pivotal figures in the abolitionist movement. Featured guests include Linda Hirshman, author of THE COLOR OF ABOLITION: How a Printer, a Prophet and a Contessa Moved a Nation, and Lydia Moland, author of LYDIA MARIA CHILD: A Radical American Life, and University of Massachusetts at Lowell Professor dann J. Broyld.

About THE COLOR OF ABOLITION: How a Printer, a Prophet and a Contessa Moved a Nation

In the crucial early years of the Abolition movement, the Boston branch of the cause seized upon the star power of the eloquent ex-slave Frederick Douglass to make its case for slaves’ freedom. Journalist William Lloyd Garrison promoted emancipation while Garrison loyalist Maria Weston Chapman, known as “the Contessa,” raised money and managed Douglass’s speaking tour from her Boston townhouse.

Conventional histories have seen Douglass’s departure for the New York wing of the Abolition party as a result of a rift between Douglass and Garrison. But, as acclaimed historian Linda Hirshman reveals, this completely misses the woman in power. Weston Chapman wrote cutting letters to Douglass, doubting his loyalty; the Bostonian abolitionists were shot through with racist prejudice, even aiming the N-word at Douglass among themselves. Through incisive, original analysis, Hirshman convinces that the inevitable breakup was in fact a successful failure. Eventually, as the most sought-after Black activist in America, Douglass was able to dangle the prize of his endorsement over the Republican Party’s candidate for president, Abraham Lincoln. Two years later the abolition of slavery—if not the abolition of racism—became immutable law.

By 1830, Lydia Maria Child had established herself as something almost unheard of in the American nineteenth century: a beloved and self-sufficient female author. Best known today for the immortal poem “Over the River and through the Wood,” Child had become famous at an early age for spunky self-help books and charming children’s stories. But in 1833, Child shocked her readers by publishing the first book-length argument against slavery in the United States—a book so radical in its commitment to abolition that friends abandoned her, patrons ostracized her, and her book sales plummeted. Yet Child soon drew untold numbers to the abolitionist cause, becoming one of the foremost authors and activists of her generation.

Copies of THE COLOR OF ABOLITION and LYDIA MARIA CHILD are available for purchase through the Mark Twain Store; proceeds benefit The Mark Twain House & Museum. Books will be shipped after the event. We regret that we are NOT able to ship books outside the United States as it is cost-prohibitive to do so.

A retired labor lawyer and professor, Linda Hirshman, J.D., PhD, is an author specializing in revolutionary social movements. Her most recent book is The Color of Abolition: How a Printer, a Prophet, and a Contessa Moved a Nation (2022), which the NYT described as “fresh, provocative and engrossing.” She has also written about the movement to end sex harassment (Reckoning), the Gay Revolution (Victory) and the feminist movement, both legal (Sisters in Law, A Woman’s Guide to Law School) and cultural (Get to Work: A Manifesto for Women of the World; Hard Bargains: The Politics of Sex). She received her J.D. from the University of Chicago Law School and her Ph.D. from the University of Illinois at Chicago and taught Philosophy and Women’s Studies at Brandeis University, specializing in the study of social movements. In recent years, she has appeared on 60 Minutes, Good Morning America, various NPR shows and the Colbert Report. She also has written for such publications as the New York Times, the Washington Post, and the Atlantic, She lives in New York City and Arizona.

Lydia Moland is professor of philosophy at Colby College. Her scholarship in German philosophy, including Hegel’s Aesthetics: The Art of Idealism, has been supported by the National Endowment for the Humanities, the ACLS, and the American Academy in Berlin. Her work on Lydia Maria Child has appeared in the Paris Review, the Boston Globe, the Washington Post, and on National Public Radio.

dann j. Broyld is an associate professor of African American History at the University of Massachusetts Lowell. He earned his PhD in nineteenth-century United States and African Diaspora History at Howard University. His work focuses on the American–Canadian borderlands and issues of Black identity, migration, and transnational relations as well as oral history, material culture, and museum-community interactions. Broyld was a 2017-18 Fulbright Canada scholar at Brock University and his book Borderland Blacks: Two Cities in the Niagara Region During the Final Decades of Slavery (2022) is published with the Louisiana State University Press.

ABOUT THE AMISTAD CENTER FOR ART & CULTURE:

In addition to collection care and development, The Amistad Foundation was intended to take on the broader tasks of preserving and interpreting African American culture and history and correcting the misrepresentation and under-representation of this important aspect of our country’s evolution.