MTH&M and the Amistad Center present BEATRICE’S LEDGER: GROWING UP IN THE JIM CROW SOUTH with Ruth and Vivian Martin and Jeffrey O.G. Ogbar (In-Person) 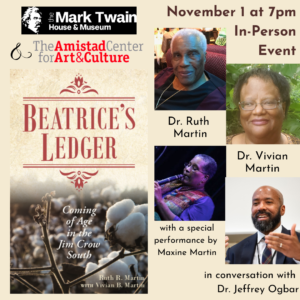 The Mark Twain House & Museum and the Amistad Center for Art & Culture are proud to present an in-person event with local authors and scholars (and mother and daughter!) Dr. Ruth Martin and Dr. Vivian Martin discussing Ruth’s new memoir BEATRICE’S LEDGER: GROWING UP IN THE JIM CROW SOUTH with UCONN History Professor Jeffrey O.G. Ogbar. Rounding out this family affair will be a special musical performance by Maxine Martin.

Ruth remembers the day the sheriff pulled up in front of her family’s home with a white neighbor who claimed Ruth’s father owed her recently deceased husband money. It was the early 1940s in Jim Crow South Carolina, and even at the age of eleven, Ruth knew a Black person’s word wasn’t trusted. But her father remained calm as he waited on her mother’s return from the house. Ruth’s mother had retrieved a gray book, which she opened and handed to the sheriff. Satisfied by what he saw, the sheriff and the woman left. Ruth didn’t know what was in that book, but she knew it was important.

In Beatrice’s Ledger, Ruth R. Martin brings to life the stories behind her mother’s entries in that well-worn ledger, from financial transactions to important details about her family’s daily struggle to survive in Smoaks, South Carolina, a small town sixty miles outside of Charleston. Once the land of plantations, slavery, and cotton, by the time Ruth was born in 1930 many of the plantations were gone but the cotton remained. Ruth’s family made a living working the land, and her father owned a local grist and sawmill used by Black and white residents in the area. The family worked hard, but life was often difficult, and Ruth offers rich descriptions of the sometimes-perilous existence of a Black family living in rural South Carolina at mid-century.

In-Person Event! $5 to register. Registrants will receive $5 off their book purchase at the event. REGISTER HERE.

Ruth R. Martin is professor emerita and former associate dean of the School of Social Work at the University of Connecticut.

Vivian B. Martin is professor and chair of the Journalism Department at Central Connecticut State University.

Dr. Jeffrey O.G. Ogbar has taught at the University of Connecticut’s Department of History since 1997. From 2003-2009 he served as the Director of the Africana Studies Institute. He served as Associate Dean for the Humanities in the College of Liberal Arts and Sciences from 2009-2012. In June 2012 he was named the University’s Vice Provost for Diversity. In 2014 he became founding director of the Center for the Study of Popular Music. His research interests include the 20th century United States with a focus in African American history. More specifically, Dr. Ogbar studies black nationalism and social justice movements. He has developed courses, lectured and published articles on subjects as varied as the New Negro Renaissance, mass incarceration, civil rights struggles, and hip-hop. Prof. Ogbar has held fellowships at Harvard University’s W.E.B. Du Bois Research Institute, where he completed work on his book, Black Power: Radical Politics and African American Identity. He also held fellowships at the Schomburg Center for Research in Black Culture in New York City, and the Africana studies program at the University of Miami where he conducted research for his book Hip-Hop Revolution: The Culture and Politics of Rap.

ABOUT THE AMISTAD CENTER FOR ART & CULTURE:

​ In addition to collection care and development, The Amistad Foundation was intended to take on the broader tasks of preserving and interpreting African American culture and history and correcting the misrepresentation and under-representation of this important aspect of our country’s evolution.