Music and Connection in Twain’s World and in Ours

Throughout his life, music helped Clemens feel connected to far-away places, to people he cared for, and to the powerful emotions those people and places stirred in him. 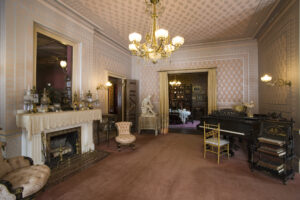 Join us for a conversation on the ways that music connected and sustained Sam Clemens and his family over the years, and the ways musicians today have innovated to maintain those connections during the pandemic.

Steve Courtney, Twain House historian, will be joined in conversation by Dr. Matt Seybold of Elmira College, Sarah Kaufold, artistic director of the Eastern Connecticut-based chamber ensemble Voices of Concinnity, and Erin Bartram, the museum’s School Programs Coordinator. This free event will also introduce the museum’s new music education program “Make Music With Mark Twain,” and premiere a new recording of “Good Night, Dear Heart” by Dan Forrest, a setting of the poem inscribed on Susy Clemens’ headstone, which Voices of Concinnity recorded masked and safely distanced on the porch of the Mark Twain House this past fall.

This event will premier live on The Mark Twain House & Museum’s Facebook page.

Dr. Matt Seybold joined the Elmira College faculty in July 2015. He earned his Ph.D. from University of California, Irvine in 2012, after which he worked at The University of Alabama. He teaches courses on all periods of American Literature, as well as interdisciplinary courses on mass media and economics. Dr. Seybold’s scholarship focuses on the intersection of economics, mass media, and literary culture in the United States from the founding of the New York Stock Exchange in 1817 to the 2008 financial crisis. He has been a National Endowment for the Humanities Summer Scholar at the Center for the History of Political Economy at Duke University, a Taylor Fellow in American Literature at University of Virginia’s Harrison Institute, and a Fathman Young Scholar Award recipient. For a full list of publications, visit MattSeybold.com.

Steve Courtney is the author of Joseph Hopkins Twichell: The Life and Times of Mark Twain’s Closest Friend (Georgia, 2008), winner of the Connecticut Book Award; ‘The Loveliest Home That Ever Was’: The Story of the Mark Twain House in Hartford (Dover, 2011); and Mark Twain’s Hartford (Arcadia, 2016), among other works. He is co-editor, with Peter Messent and Harold K. Bush, of The Mark Twain-Joseph Hopkins Twichell Letters (Georgia, 2017, paperback edition published 2020). He has been a journalist for forty years, much of that time at The Hartford Courant, and has served as both publicist and curatorial project coordinator at The Mark Twain House & Museum in Hartford, Connecticut.

Sarah Kaufold is Artistic Director of Consonare Choral Community, a Connecticut nonprofit arts organization that works to build community through choral music. She conducts two of Consonare’s ensembles, Voices of Concinnity, a 12-voice professional chamber ensemble, and Choir Matrix, a community women’s vocal ensemble, both of which are recipients of the 2020 Alfred Nash Patterson Grant. She has directed singers of all ages and abilities in a variety of settings, including middle, high school, and collegiate choirs, church choirs for children and adults, adult community programs, and professional ensembles. Sarah holds a Masters in Choral Conducting from UConn with extensive graduate study from Cal State L.A. She is also co-founder of Songs of Comfort, created in response to the pandemic to fulfill song requests for those suffering in isolation, for which she received the 2020 CT Artist Respond Grant. Visit her website to hear recordings from each of these projects.

Erin Bartram has been the School Programs Coordinator at The Mark Twain House & Museum since 2019. She earned her Ph.D. at the University of Connecticut in 2015 and taught for three years at the University of Hartford before joining the museum. She is co-founder and editor of Contingent Magazine, and co-editor of the Rethinking Career, Rethinking Academia series for the University Press of Kansas. Her work has appeared in the Washington Post, the Chronicle of Higher Education, U.S. Catholic Historian, and Religion & American Culture. She has also been a member of Voices of Concinnity since its inception.