MY FAVORITE POISON with Deborah Blum and Dean Jobb 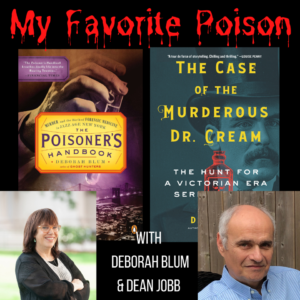 PICK YOUR POISON WEEK continues with a deadly discussion (and return engagement) by two people who know a thing or two about the poisoner’s proclivities. This conversation will cover the storied poisons of history, some of the most spectacular (and twisted) poisoners of our time, and a nod to some of the great poison-infused murder stories. Deborah Blum, author of the best-seller The Poisoner’s Handbook: Murder and the Birth of Forensic Medicine in Jazz-Age New York, called “one of the best true crime books of the last decade” by CrimeReads joins Dean Jobb, author of The Case of the Murderous Doctor Cream: The Hunt for a Victorian Serial Killer, named by The New York Times as one of this summer’s buzziest, must-read books.”

Signed copies of The Poisoner’s Handbook and The Case of the Murderous Dr. Cream will be available for purchase through the Mark Twain Store; proceeds benefit The Mark Twain House & Museum. Books will be shipped after the event. We regret that we are NOT able to ship books outside the United States as it is cost-prohibitive to do so.

Deborah Blum, director of the Knight Science Journalism program at MIT and the publisher of Undark magazine, is a Pulitzer-Prize winning science journalist, columnist and author of six books, most recently, The Poison Squad, a 2018 New York Times Notable Book. That book, as with all her most recent books, focuses on influential moments in the history of science. Others include the New York Times bestseller, The Poisoner’s Handbook (2010),  to Ghost Hunters (2006) and Love at Goon Park (2002). A co-editor of two editions of A Field Guide for Science Writers, she is now under contract with Oxford University Press as a co-editor of a forthcoming guide to science journalism. She has worked as a science columnist for The New York Times, a blogger for Wired, and has written for other publications ranging from The Wall Street Journal to Mother Jones, The Guardian to Lapham’s Quarterly. Her work has been anthologized in Best American Science Writing, Best American Nature Writing, and Best Science On-Line.

Before joining MIT in the summer of 2015, she was the Helen Firstbrook Franklin Professor of Journalism at the University of Wisconsin-Madison, a position she held for 18 years. Previously, she worked at five different newspapers, including as a  staff science writer for The Sacramento Bee, where she won the Pulitzer in 1992 for her reporting on ethical issues in primate research.  She received her ABJ from the University of Georgia in 1976 and her MA from the University of Wisconsin-Madison’s School of Journalism in Mass Communication in 1982.

Dean Jobb is an award-winning author and journalist and a professor at the University of King’s College in Halifax, Nova Scotia, where he teaches in the Master of Fine Arts in Creative Nonfiction program. His latest book, The Case of the Murderous Dr. Cream: The Hunt for a Victorian Era Serial Killer, published by Algonquin Books, is longlisted for the American Library Association’s 2022 Andrew Carnegie Medal for Excellence in Nonfiction. It’s also a  finalist as the Chicago Writers Association’s Nonfiction Book of the Year. He is the author of eight previous books, including the Jazz Age con-man tale Empire of Deception (Algonquin Books), which the New York Times Book Review called “intoxicating and impressively researched.” Dean’s work appears in CrimeReads, The Irish Times, and the Washington Independent Review of Books and he writes a monthly true-crime column, “Stranger Than Fiction,” for Ellery Queen’s Mystery Magazine.