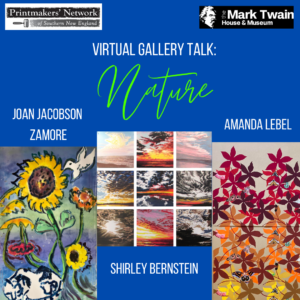 Shirley Bernstein will be talking about her personal creative journey with nature, and how this journey contributed to her choice of the image she created for the exhibit at the Mark Twain House & Museum.

During Amanda Lebel’s portion of the Nature discussion, she will discuss her print Virginia Creeper and how it was inspired by the quote, “Nature knows no indecencies; man invents them.” She will share how it relates to her larger body of work about native and invasive species and how historical wallpapers and pattern design have influenced her work.

The Evocative Mark Twain Inspires the Printmakers’ Network of Southern New England is on view at The Mark Twain House & Museum beginning March 24, 2022 with a free opening reception at 5:30pm and is set to run through January 23, 2023. The museum is open daily from 10AM to 4:30PM. Admission to the exhibition is included in house tour admission; museum center-only tickets including The Evocative Mark Twain… is $7.25. For information and tour reservations, please CLICK HERE.

Shirley attended Philadelphia College of Arts, BFA and Indiana University, MFA.She has an extensive exhibition record and is included in many collections private and public both nationally and internationally. She was also a dedicated college art professor and retired after a successful career. She is a founding member of Printmakers’ Network of Southern New England, a signature member of Oil Pastel Society of America, a member of Boston Printmakers, Wood Engravers’ Network, The Center for Contemporary Printmaking, Society of American Graphic Artists’ and Los Angles Printmakers.

Joan Jacobson Zamore grew up in NYC where she attended The High School of Music & Art.  She earned her undergraduate and graduate degrees in teaching and art at Hunter College in New York and attended Pratt Institute from 1985-1987 to obtain her MFA in Printmaking.  Ms. Jacobson Zamore’s work is included in public collections such as Yale University, New Haven, Ct., Colgate University, Hamilton, New York, the Housatonic Museum of Art, Bridgeport, Ct, Eastern, Ct. State University, Aetna Corporation, The Art Connection, a public subsidized Agency in Boston MA, which places her work in government and private agencies, as well as other private collections. Her work has been published numerous times in a poetry magazine, “Parnassus”.  She has received numerous prizes for her work.  Professionally she is affiliated with an artist group; PRINTMAKERS NETWORK OF SOUTHERN NEW ENGLAND- www.PNSNE.ORG

Amanda Lebel is currently the Chair of Visual and Performing Arts at Naugatuck Valley Community College. Amanda attended the University of Hartford, Hartford Art School, BFA Printmaking and the Rhode Island School of Design, MFA Printmaking.  She has received a number of grants and fellowships, including a moku hanga workshop at Anderson Ranch in Snowmass Colorado, a collaborative print and book project with el Taller de Experimental in Havana, Cuba and a visiting artist printmaking workshop at the University of Hartford. Her work has been included in several print biennials, museum shows and printmaking exhibits throughout the country.