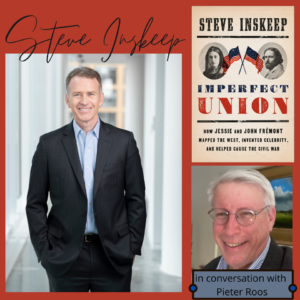 In Imperfect Union: How Jessie and John Frémont Mapped the West, Invented Celebrity, and Helped Cause the Civil War, journalist Steve Inskeep tells the riveting story of John and Jessie Frémont, the husband and wife team who in the 1800s were instrumental in the westward expansion of the United States, and thus became America’s first great political couple With rare detail and in consummate style, Steve Inskeep tells the story of a couple whose joint ambitions and talents intertwined with those of the nascent United States itself. Taking advantage of expanding news media, aided by an increasingly literate public, the two linked their names to the three great national movements of the time—westward settlement, women’s rights, and opposition to slavery. Together, John and Jessie Frémont took part in events that defined the country and gave rise to a new, more global America. Theirs is a surprisingly modern tale of ambition and fame; they lived in a time of social and technological disruption and divisive politics that foreshadowed our own. In Imperfect Union, as Inskeep navigates these deeply transformative years through Jessie and John’s own union, he reveals how the Frémonts’ adventures amount to nothing less than a tour of the early American soul.

Steve Inskeep, co-host of Morning Edition, the most widely heard radio news program in the United States, will be in conversation with MTH&M Executive Director Pieter Roos.

Signed copies of Imperfect Union are available for purchase through the Mark Twain Store. Proceeds benefit The Mark Twain House & Museum. Books will ship after the event. We regret that we cannot ship outside of the U.S. at this time.