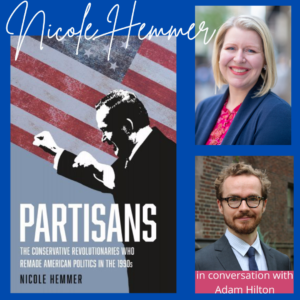 Ronald Reagan has long been lionized for building a conservative coalition sustained by an optimistic vision of American exceptionalism, small government, and free markets. But as historian Nicole Hemmer reveals, the Reagan coalition was short-lived; it fell apart as soon as its charismatic leader left office. In the 1990s — a decade that has yet to be recognized as the breeding ground for today’s polarizing politics — changing demographics and the emergence of a new political-entertainment media fueled the rise of combative far-right politicians and pundits. These partisans, from Pat Buchanan and Newt Gingrich to Rush Limbaugh and Laura Ingraham, forged a new American right that emphasized anti-globalism, appeals to white resentment, and skepticism about democracy itself.

Copies of Partisans are available for purchase through the Mark Twain Store; proceeds benefit The Mark Twain House & Museum. Books will be shipped after the event. We regret that we are NOT able to ship books outside the United States as it is cost-prohibitive to do so.

Nicole Hemmer is an associate professor of history and director of the Carolyn T. and Robert M. Rogers Center for the Study of the Presidency at Vanderbilt University. She is author of Partisans: The Conservative Revolutionaries Who Remade American Politics in the 1990s and Messengers of the Right: Conservative Media and the Transformation of American Politics. A prolific writer and podcaster, she is currently a columnist at CNN and co-host of the podcasts Past Present and This Day in Esoteric Political History.

Adam Hilton is Assistant Professor of Politics at Mount Holyoke College. His research and teaching focuses on the contentious relationship between political parties and activist groups and its effects on representational inequality and democratic governance in American political development. His first book, True Blues: The Contentious Transformation of the Democratic Party, was published by the University of Pennsylvania Press in 2021.