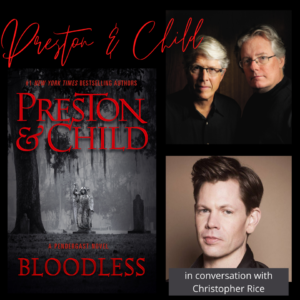 The Mark Twain House & Museum is delighted to welcome back three New York Times bestselling authors we have been honored to present before: the legendary duo of Douglas Preston and Lincoln Child in conversation with Christopher Rice to discuss Preston & Child’s latest thrilling chiller Bloodless.

In this latest installment of the #1 NYT bestselling series, FBI Agent Pendergast faces the strangest, most challenging puzzle of his career, when bodies—drained to the last drop of blood—begin appearing in Savannah, GA.

On the evening of November 24, 1971, D. B. Cooper hijacked Flight 305—Portland to Seattle—with a fake bomb, collected a ransom of $200,000, and then parachuted from the rear of the plane, disappearing into the night…and into history. Fifty years later, Agent Pendergast takes on a bizarre and gruesome case: in the ghost-haunted city of Savannah, Georgia, bodies are found with no blood left in their veins—sowing panic and reviving whispered tales of the infamous Savannah Vampire.As the mystery rises along with the body count, Pendergast and his partner, Agent Coldmoon, race to understand how—or if—these murders are connected to the only unsolved skyjacking in American history. Together, they uncover not just the answer…but an unearthly evil beyond all imagining.
FREE virtual program with donations gratefully accepted. REGISTER HERE.
Signed copies of Bloodless will be available for purchase through the Mark Twain Store; proceeds benefit The Mark Twain House & Museum. Books will be shipped after the event. We regret that we are NOT able to ship books outside the United States as it is cost-prohibitive to do so.
About Douglas Preston: Douglas Preston has published thirty-six books of both nonfiction and fiction, of which twenty-nine have been New York Times bestsellers. He is the co-author, with Lincoln Child, of the Pendergast series of thrillers. He writes about archaeology and anthropology for the New Yorker Magazine, and he worked as an editor at the American Museum of Natural History in New York and taught nonfiction writing at Princeton University. He currently serves as President of the Authors Guild, the nation’s oldest and largest association of authors and journalists.
About Lincoln Child: Lincoln Child is the co-author, with Douglas Preston, of such highly-acclaimed thrillers as CROOKED RIVER, OLD BONES, VERSES FOR THE DEAD, CABINET OF CURIOSITIES, and RELIC, the latter two of which were chosen by an NPR poll as among the 100 greatest thrillers ever written. He has also published seven thrillers of his own, most recently the Jeremy Logan books FULL WOLF MOON and THE FORGOTTEN ROOM. 26 of his joint and solo books have become bestsellers, 3 of which debuted at #1 on the New York Times list. He lives in Sarasota, Florida.
About Christopher Rice: A New York Times bestseller since his first publication at the age of twenty-two, Christopher Rice is the author of BONE MUSIC (an Amazon Charts bestseller and the first novel in the Burning Girl series) and its sequels, BLOOD ECHO and BLOOD VICTORY, along with Bram Stoker finalists THE HEAVENS RISE and THE VINES. His second novel, THE SNOW GARDEN, won a Lambda Literary Award. He is an executive producer on the AMC Studios adaptations of The Vampire Chronicles and The Lives of the Mayfair Witces by Anne Rice, and he also collaborated with her on RAMSES THE DAMNED: THE PASSION OF CLEOPATRA, a sequel to her phenomenally popular novel THE MUMMY OR RAMSES THE DAMNED. Together with his best friend and producing partner, New York Times bestselling novelist, Eric Shaw Quinn, he runs the podcast and video network, TDPS, which you can find at www.TheDinnerPartyShow.com. Born in the San Francisco Bay Area , Christopher moved to New Orleans at the age of ten and later attended both Brown University and New York University’s Tisch School of the Arts before settling in West Hollywood, California, the city he currently calls home.