PLEASE NOTE THE CHANGE OF TIME TO 9PM EDT. 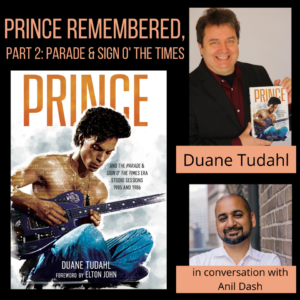 After our highly popular program on the passing of Prince, we have a follow-up event with one of the preeminent Prince scholars working today. Duane Tudahl is releasing his second volume of a comprehensive study of Prince’s work as a musician. With the meteoric success of Purple Rain, Prince was no longer the young rebel who shocked and offended the world. With a fly-on-the-wall perspective, Tudahl invites you into the room as Prince struggles with his success, the commercial and critical failure of Under The Cherry Moon, the breakup of bands and relationships that had buoyed him for years. Having cast off what was familiar, he went about creating the soundtrack of a new revolution, with Prince, as always, at the forefront. Ultimately Prince rebounded with a growing maturity that found him writing such masterpieces as “Forever In My Life,” “If I Was Your Girlfriend,” and the timeless social commentary of “Sign O’ The Times.”

Duane Tudahl takes us on an emotional and intimate journey of love, loss, rivalry, and renewal revealed through unprecedented access to dozens of musicians, singers, studio engineers, and others who worked with him and knew him best—with never-before-published memories from the Revolution, the Time, the Family, and Apollonia 6. His new book also includes is a heartfelt foreword by musical legend Elton John about his time and friendship with Prince.
Joining Tudahl in conversation will be Prince enthusiast, blogger and Glitch CEO Anil Dash.
FREE virtual program, although donations are gratefully accepted. REGISTER HERE.

Signed copies of Prince and the Parade & Sign ‘O The Times Era Studio Sessions: 1985 – 1986 will be available for purchase through the Mark Twain Store; proceeds benefit The Mark Twain House & Museum. Books will be shipped after the event. We regret that we are NOT able to ship books outside the United States as it is cost-prohibitive to do so.

Duane Tudahl is an award winning author who has worked in entertainment for over thirty years and has produced and/or directed documentary programming for the History Channel, CBS, GTV, Fox, Discovery, Pax, the Gospel Music Channel, the Food Channel, Tru-TV, and HGTV, among others. He has also been an editor on multiple Emmy-nominated programs, including Intervention, and Unsolved Mysteries. He is a former stand-up comic and has been writing about Prince and the Minneapolis music scene for over 25 years. Prince and the Parade/Sign O’ The Times Era Studio Sessions: 1985-1986 is the second book in his series that chronicles Prince’s legacy in the recording studio.
Anil Dash is the CEO of Glitch, the friendly developer community where coders have collaborated to create and share millions of web apps. He is recognized as a leading advocate for more humane, inclusive and ethical technology through his work as an entrepreneur, activist and writer.
Programs at The Mark Twain House & Museum are made possible in part by support from the Connecticut Department of Economic and Community Development, Office of the Arts, and the Greater Hartford Arts Council’s United Arts Campaign and its Travelers Arts Impact Grant program, with major support from The Travelers Foundation.