Prince Remembered, Part 3: Touré on “Nothing Compares 2 U” 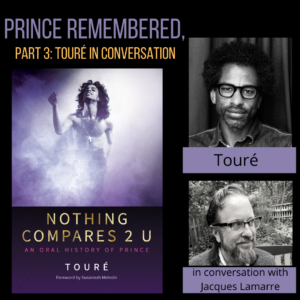 The MTH&M rounds out its mini-series of author conversations on the musical genius with author, host and commentator Touré discussing his second book on the singer-songwriter, Nothing Compares 2 U: An Oral History of Prince with playwright and Prince enthusiast Jacques Lamarre.

Nothing Compares 2 U is built from years of interviews with dozens of people who were in Prince’s inner circle—from childhood friends to band members to girlfriends to managers to engineers to photographers, and more—all providing unique insights into the man and the musician.

This revelatory book is a deeply personal and candid discussion of who Prince really was emotionally, professionally, and romantically. It tackles subjects never-before-discussed, including Prince’s multiple personalities, his romantic relationships, his traumatic childhood and how it propelled him into his music career, and how he found the inspiration for some of his most important songs, including “Purple Rain,” “Starfish and Coffee,” and the unheard “Wally.” Nothing Compares 2 U paints the most complete picture yet written of the most important and most mysterious artist of his time.

Signed copies of Nothing Compares 2 U will be available for purchase through the Mark Twain Store; proceeds benefit The Mark Twain House & Museum. Books will be shipped after the event. We regret that we are NOT able to ship books outside the United States as it is cost-prohibitive to do so.

———————
About the author:
Touré is an author who has published six books, including I Would Die 4 U: Why Prince Became an Icon and Who’s Afraid of Post-Blackness?: What It Means to Be Black Now, a New York Times and Washington Post Notable Book. He was a TV host at MSNBC, MTV, and BET, and a correspondent at CNN. He hosts the podcast Touré Show. He has written for The New York Times, The New Yorker, Rolling Stone, The Washington Post, The Nation, Vogue, and many other publications. He lives in Brooklyn with his wife and two children. Follow his Instagram @Toure.
–
Programs at The Mark Twain House & Museum are made possible in part by support from the Connecticut Department of Economic and Community Development, Office of the Arts, and the Greater Hartford Arts Council’s United Arts Campaign and its Travelers Arts Impact Grant program, with major support from The Travelers Foundation. For more information call 860-247-0998 or visit marktwainhouse.org