QUEEN OF THE CON: Thomas Crowl in conversation with Susan Campbell 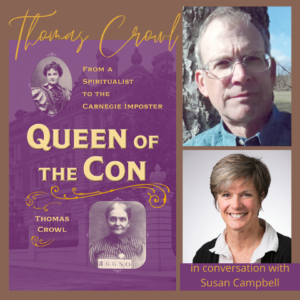 Biographer and historian Thomas Crowl joins Pulitzer Prize-winning journalist and author Susan Campbell to discuss his definitive account of audacious con woman Cassie Chadwick, the Carnegie Imposter!
Queen of the Con tells the true story of Cassie Chadwick, a successful swindler and “one of the top 10 imposters of all time,” according to Time Magazine. Born Betsy Bigley in 1857 in Canada, she first operated as Madame Devere, a European clairvoyant, and in 1890 was arrested for defrauding a Toledo bank of $20,000. In the mid-1890s, while working as a madam in Cleveland, Cassie met and married a widowed physician with a coveted Euclid Avenue address.

At the dawn of the 20th century, Cassie borrowed $2 million (worth roughly $50 million today) throughout northern Ohio, Pittsburgh, New York, and Boston by convincingly posing as the illegitimate daughter of wealthy industrialist-turned-philanthropist Andrew Carnegie. When the fraud collapsed in 1904, it was a nationwide sensation. “Yes, I borrowed money in very large amounts,” she told reporters, “but what of it? You can’t accuse a poor businesswoman of being a criminal, can you?” Carnegie, who never responded to the claim, merely joked that Mrs. Chadwick had demonstrated that his credit was still good.

This meticulously researched book is the first full-length account of the notorious career of this fascinating woman, the forerunner to more recent female scammers like Theranos founder Elizabeth Holmes or fake heiress Anna Sorokin, the “Soho Grifter.” Crowl’s engaging storytelling also leads readers to consider aspects of gender stereotypes, social and economic class structures, and the ways in which we humans can so often be fooled.

FREE virtual event, although donations are gratefully accepted. REGISTER HERE.
Copies of Queen of the Con signed by the author are available for purchase through the Mark Twain Store; proceeds benefit The Mark Twain House & Museum. Books will be shipped after the event. We regret that we are NOT able to ship books outside the United States as it is cost-prohibitive to do so.
———————
ABOUT THE AUTHOR
Thomas Crowl is a veterinarian in Ohio. He is an amateur social historian and has published several articles in Timeline, History Magazine, and Man at Arms.
ABOUT THE MODERATOR

Susan Campbell is a Pulitzer Prize-winning journalist, a widely read Hartford Courant columnist, and the author of two books with a third forthcoming. She’s worked across the media landscape as an award-winning print journalist, a regular commentator on WNPR, and a guest on CBS’ “Sunday Morning,” the BBC, WTNH-TV, and the local news show “Face the State.” She is also part of the Connecticut Health Investigative Team, an award-winning health and safety website.

Her work at The Courant – where she was a staff writer and columnist for 25 years – has been recognized by the National Women’s Political Caucus, the New England Associated Press News Executives, the National Society of Newspaper Columnists, and the Society for Professional Journalists, among numerous other organizations. She’s also written for Connecticut Magazine, Salon.com, the Ms. Foundation blog, and Patheos.com. She currently writes a weekly Sunday column for Hearst newspapers in Connecticut.