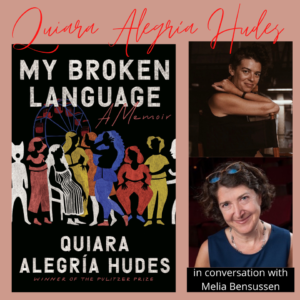 In 2008, Quiara Alegría Hudes became the Aetna New Voices Playwright in Residence for Hartford Stage. Among the works developed during her residency was Water by the Spoonful, a play that premiered at Hartford Stage in 2011 that went on to win the Pulitzer Prize for Drama. Her subsequent play Elliot, a Soldier’s Fugue was a Pulitzer finalist. She is the book writer for Lin-Manuel Miranda’s Tony Award-winning musical In the Heights, the movie of which is premiering on screens in June! She joins Hartford Stage Artistic Director Melia Bensussen for a conversation on her new memoir, My Broken Language.

About My Broken Language: Quiara Alegría Hudes was the sharp-eyed girl on the stairs while her family danced in her grandmother’s tight North Philly kitchen. She was awed by her aunts and uncles and cousins, but haunted by the secrets of the family and the unspoken, untold stories of the barrio—even as she tried to find her own voice in the sea of language around her, written and spoken, English and Spanish, bodies and books, Western art and sacred altars. Her family became her private pantheon, a gathering circle of powerful orisha-like women with tragic real-world wounds, and she vowed to tell their stories—but first she’d have to get off the stairs and join the dance. She’d have to find her language.   Weaving together Hudes’s love of books with the stories of her family, the lessons of North Philly with those of Yale, this is an inspired exploration of home, memory, and belonging—narrated by an obsessed girl who fought to become an artist so she could capture the world she loved in all its wild and delicate beauty.

This virtual program is FREE, but donations will be gratefully accepted and split evenly between Hartford Stage and The Mark Twain House & Museum. REGISTER HERE.
Signed copies of MY BROKEN LANGUAGE will be available for purchase through the Mark Twain Store; proceeds benefit The Mark Twain House & Museum. Books will be shipped after the event. We regret that we are NOT able to ship books outside the United States as it is cost-prohibitive to do so.
Programs at The Mark Twain House & Museum are made possible in part by support from the Connecticut Department of Economic and Community Development, Office of the Arts, and the Greater Hartford Arts Council’s United Arts Campaign and its Travelers Arts Impact Grant program, with major support from The Travelers Foundation. For more information call 860-247-0998 or visit marktwainhouse.org