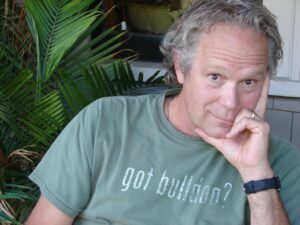 Join us as our friend Rand Richards Cooper reads his memoir-essay “Listening to Restaurants,” first published in Bon Appétit in 2007, which explores the role restaurants have played in his life over the decades. Rand says, “The focus is on a couple of famed eateries in the New London of my childhood, plus the restaurant my parents went to on their long-ago honeymoon in Provincetown, and a corner restaurant I frequented when I lived in Germany in the 1990s. I wanted to write about restaurants not merely as places where we eat great meals with friends and family, but also as places that contribute to our life stories – helping us configure and preserve memories; informing how we understand our pasts, our parents, and our sense of ourselves. I wanted to write about them not just as fun places, in other words, but as significant places. I love restaurants, and have had the great good fortune to spend part of my career writing about them. During the interruption of the past two months I’ve worried about all the many thousands of people who work in restaurants, and how soon they’ll get their livelihood back. And I have missed being in restaurants. So it seemed like an apt time to read a personal love song to the institution.

“Listening to Restaurants” includes remembrances of such Connecticut eateries as Hughie’s in New London, Chuck’s Steak House which, Rand says, “in 1970 was the coolest thing going,” and Michael’s Dairy, a famed ice cream establishment in New London since… since forever.