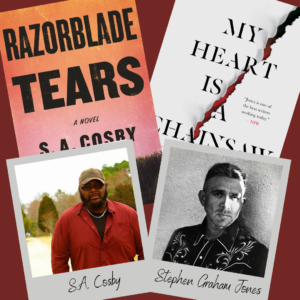 Fresh off of two hugely successful novels, S.A. Cosby (Blacktop Wasteland) and Stephen Graham Jones (The Only Good Indians) sit down to discuss Cosby’s acclaimed follow-up novel Razorblade Tears and Jones’s newest chiller My Heart is a Chainsaw. The Mark Twain House & Museum is delighted to present these two amazing authors reflecting on their uniquely American stories of murder and revenge.
In Razorblade Tears, we find a Black father, a white father, two murdered sons, and a quest for vengeance. Ike Randolph has been out of jail for fifteen years, with not so much as a speeding ticket in all that time. But a Black man with cops at the door knows to be afraid. The last thing he expects to hear is that his son Isiah has been murdered, along with Isiah’s white husband, Derek. Ike had never fully accepted his son but is devastated by his loss. Derek’s father Buddy Lee was almost as ashamed of Derek for being gay as Derek was ashamed his father was a criminal. Buddy Lee still has contacts in the underworld, though, and he wants to know who killed his boy. Ike and Buddy Lee, two ex-cons with little else in common other than a criminal past and a love for their dead sons, band together in their desperate desire for revenge. In their quest to do better for their sons in death than they did in life, hardened men Ike and Buddy Lee will confront their own prejudices about their sons and each other, as they rain down vengeance upon those who hurt their boys.

Alma Katsu calls My Heart Is a Chainsaw “a homage to slasher films that also manages to defy and transcend genre.” On the surface is a story of murder in small-town America. But beneath is its beating heart: a biting critique of American colonialism, Indigenous displacement, and gentrification, and a heartbreaking portrait of a broken young girl who uses horror movies to cope with the horror of her own life. Jade Daniels is an angry, half-Indian outcast with an abusive father, an absent mother, and an entire town that wants nothing to do with her. She lives in her own world, a world in which protection comes from an unusual source: horror movies…especially the ones where a masked killer seeks revenge on a world that wronged them. And Jade narrates the quirky history of Proofrock as if it is one of those movies. But when blood actually starts to spill into the waters of Indian Lake, she pulls us into her dizzying, encyclopedic mind of blood and masked murderers, and predicts exactly how the plot will unfold.

FREE virtual program, but donations are gratefully accepted. REGISTER HERE.
Signed copies of Razorblade Tears and My Heart is a Chainsaw will be available for purchase through the Mark Twain Store; proceeds benefit The Mark Twain House & Museum. Books will be shipped after the event. We regret that we are NOT able to ship books outside the United States as it is cost-prohibitive to do so.
———————
S. A. Cosby is an Anthony Award-winning writer from southeastern Virginia. His the bestselling author of Blacktop Wasteland, a New York Times Book ReviewEditors’ Choice and Goodreads Choice Awards semifinalist, as well as Brotherhood of the Blade and My Darkest Prayer. When not writing, he is an avid hiker and chess player.
Stephen Graham Jones is the NYT bestselling author of nearly thirty novels and collections, and there’s some novellas and comic books in there as well. Stephen’s been an NEA recipient, has won the Texas Institute of Letters Award for Fiction, the LA Times Ray Bradbury Prize, the Independent Publishers Award for Multicultural Fiction, a Bram Stoker Award, four This is Horror Awards, and he’s been a finalist for the Shirley Jackson Award and the World Fantasy Award. He’s also made Bloody Disgusting’s Top Ten Horror Novels, and is the guy who wrote Mongrels, The Only Good Indians, and My Heart is a Chainsaw. Stephen lives in Boulder, Colorado.
———————
Programs at The Mark Twain House & Museum are made possible in part by support from the Connecticut Department of Economic and Community Development, Office of the Arts, and the Greater Hartford Arts Council’s United Arts Campaign and its Travelers Arts Impact Grant program, with major support from The Travelers Foundation. For more information call 860-247-0998 or visit marktwainhouse.org.