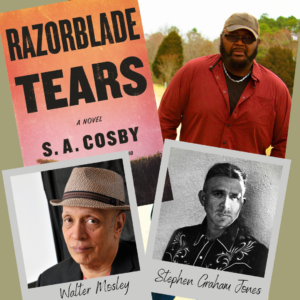 How often do you get to hear one of the hottest new authors on the scene in conversation with a literary legend AND a highly-acclaimed bestseller?? S.A. Cosby, fresh off the success of his hugely celebrated debut novel Blacktop Wasteland, sits down to discuss his follow-up Razorblade Tears with Walter Mosley and Stephen Graham Jones.
In Razorblade Tears, we find a Black father, a white father, two murdered sons, and a quest for vengeance. Ike Randolph has been out of jail for fifteen years, with not so much as a speeding ticket in all that time. But a Black man with cops at the door knows to be afraid. The last thing he expects to hear is that his son Isiah has been murdered, along with Isiah’s white husband, Derek. Ike had never fully accepted his son but is devastated by his loss. Derek’s father Buddy Lee was almost as ashamed of Derek for being gay as Derek was ashamed his father was a criminal. Buddy Lee still has contacts in the underworld, though, and he wants to know who killed his boy. Ike and Buddy Lee, two ex-cons with little else in common other than a criminal past and a love for their dead sons, band together in their desperate desire for revenge. In their quest to do better for their sons in death than they did in life, hardened men Ike and Buddy Lee will confront their own prejudices about their sons and each other, as they rain down vengeance upon those who hurt their boys.
FREE virtual program, but donations are gratefully accepted. REGISTER HERE.
Signed copies of Razorblade Tears will be available for purchase through the Mark Twain Store; proceeds benefit The Mark Twain House & Museum. Books will be shipped after the event. We regret that we are NOT able to ship books outside the United States as it is cost-prohibitive to do so.
—————–
S. A. Cosby is an Anthony Award-winning writer from southeastern Virginia. His the bestselling author of Blacktop Wasteland, a New York Times Book ReviewEditors’ Choice and Goodreads Choice Awards semifinalist, as well as Brotherhood of the Blade and My Darkest Prayer. When not writing, he is an avid hiker and chess player.
Walter Mosleyis one of the most versatile and admired writers in America. He is the author of more than sixty critically acclaimed books that cover a wide range of ideas, genres, and forms including fiction (literary, mystery, and science fiction), political monographs, writing guides includingElements of Fiction, a memoir in paintings, and a young adult novel called47. His work has been translated into twenty-five languages, From a forthcoming collection of short stories,The Awkward Black Man, to his daring novelJohn Woman, which explored deconstructionist history, and his standalone crime novelDown the River and Unto the Sea, which won an Edgar Award for Best Novel, the rich storylines that Mosley has created deepen the understanding and appreciation of Black life in the United States. He has introduced an indelible cast of characters into the American canon starting with his first novel,Devil in a Blue Dress, which brought Easy Rawlins, his private detective in postwar Los Angeles and his friends Jackson Blue and Raymond “Mouse” Alexander into reader’s lives. Mosley has explored both large issues and intimate realities through the lens of characters like the Black philosopher Socrates Fortlow; the elder suffering from Alzheimer’s, Ptolemy Grey; the bluesman R L; the boxer and New York private investigator Leonid McGill; Debbie Dare, the porn star ofDebbie Doesn’t Do It Anymore; and Tempest Landry and his struggling angel, among many others. Mosley has also written and staged several plays includingThe Fall of Heaven, based on his Tempest Landry stories and directed by the acclaimed director Marion McClinton. Several of his books have been adapted for film and television includingDevil in a Blue Dress(starring Denzel Washington, Don Cheadle and Jennifer Beals) and the HBO production ofAlways Outnumbered (starring Laurence Fishburne and Natalie Cole). His short fiction has been widely published, and his nonfiction—long-form essays and op-eds—have appeared in theNew York Times, Los Angeles Times,andThe Nationamong other publications. He is also a writer and an executive producer on the John Singleton FX drama series, “Snowfall.”
Stephen Graham Jones is the NYT bestselling author of nearly thirty novels and collections, and there’s some novellas and comic books in there as well. Stephen’s been an NEA recipient, has won the Texas Institute of Letters Award for Fiction, the LA Times Ray Bradbury Prize, the Independent Publishers Award for Multicultural Fiction, a Bram Stoker Award, four This is Horror Awards, and he’s been a finalist for the Shirley Jackson Award and the World Fantasy Award. He’s also made Bloody Disgusting’s Top Ten Horror Novels, and is the guy who wrote Mongrels and The Only Good Indians. Next up is My Heart is a Chainsaw. Stephen lives in Boulder, Colorado.