“Requiem for the Massacre: A Black History on the Conflict, Hope, and Fallout of the 1921 Tulsa Race Massacre” with RJ Young and Katy Mullins (Virtual) 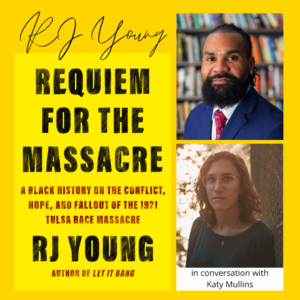 RJ Young joins The Mark Twain House & Museum to discuss his striking new book, Requiem for the Massacre: A Black History on the Conflict, Hope, and Fallout of the 1921 Tulsa Race Massacre with fellow writer Katy Mullins.

The massacre against the Black residents of Tulsa, Oklahoma was covered up and ignored for generations. Young shows how Tulsa remains all too tolerant of racial injustice while it attempts to end the power of the status quo and face its racist past. Blending journalism and memoir, Young threads his own reflections together with the stories of a community and a nation trying to find healing and hope.

Copies of Requiem for the Massacre are available for purchase through the Mark Twain Store; proceeds benefit The Mark Twain House & Museum. Books will be shipped after the event. We regret that we are NOT able to ship books outside the United States as it is cost-prohibitive to do so.

RJ Young is a writer originally from and currently living in Tulsa, Oklahoma. He earned a bachelor’s degree from the University of Tulsa and a master’s degree in professional writing from the University of Oklahoma. His work has appeared in Grantland, Racialicious, Reuters, TheOklahoman, This Land Press, Knoxville News Sentinel, TulsaWorld, SB Nation Longform and USA Today, among other publications. Requiem for the Massacre is his second book.

Katy Mullins is a writer originally from Pittsburgh, Pennsylvania. She holds a BA in English from the University of Pittsburgh, and an M. Ed in Education from American University. She is an MFA student at George Mason University with a focus in Creative Writing—Fiction. Her work has appeared or is forthcoming in journals such as Gulf Coast, Baltimore Review, Brevity, and others. She is the assistant fiction editor of Phoebe and serves on the editorial board of Nimrod International Journal. She lives in Washington, D.C.