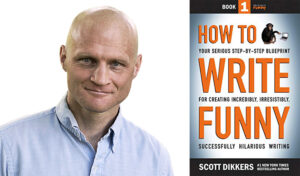 Join us for a virtual evening with Scott Dikkers, the founder of TheOnion.com and New York Times bestselling author of How to Write Funny, as he talks about how humor and satire can survive in turbulent times!

Dikkers founded the world’s first humor website, TheOnion.com, in 1996. A few years earlier he helped found the original Onion newspaper. He’s served as The Onion’s owner and editor-in-chief, on and off, for much of the last quarter century.

Dikkers co-wrote and edited The Onion’s first original book, Our Dumb Century, a look at recent history through front pages of The Onion. It’s sold over a million copies, debuting as a #1 New York Times and #1 Amazon bestseller. He also co-wrote and edited The Onion’s second original book, Our Dumb World, a world atlas parody, which also debuted on the New York Times bestseller list.

In the mid-2000s, Dikkers headed up the creation of “The Onion News Network” web series, serving as a director and executive producer. The series gave rise to many viral videos and a TV series on IFC. The web shorts won a Peabody Award in 2008.

Dikkers led The Onion’s rise from small, unknown college humor publication to internationally respected comedy brand. He gathered a talented team of writers and editors over the years, working with them to develop The Onion’s culture of creative freedom and brutal honesty, its distinct comic voice, and its reliable process for generating award-winning satire, day after day.

This unique process is spelled out in his books, How to Write Funny, and the second in the series, How to Write Funnier, which are the basis of the Writing with The Onion program he created and teaches at The Second City Training Center in Chicago. Dikkers offers other courses and free resources for comedy writers on the How to Write Funny website.

His work with The Onion, its website, and other ancillary products, earned Dikkers the #43 spot on Time magazine’s list of the Top 50 “Cyber Elite” alongside such iconic figures as Steve Jobs, Bill Gates, and George Lucas.