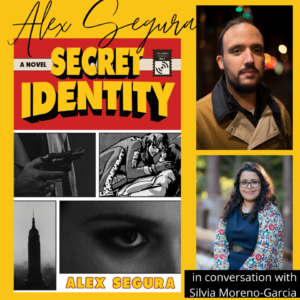 It’s 1975 and the comic book industry is struggling, but Carmen Valdez doesn’t care. She’s an assistant at Triumph Comics, which doesn’t have the creative zeal of Marvel nor the buttoned-up efficiency of DC, but it doesn’t matter. Carmen is tantalizingly close to fulfilling her dream of writing a superhero book.

That dream is nearly a reality when one of the Triumph writers enlists her help to create a new character, which they call “The Lethal Lynx,” Triumph’s first female hero. But her colleague is acting strangely and asking to keep her involvement a secret. And then he’s found dead, with all of their scripts turned into the publisher without her name. Carmen is desperate to piece together what happened to him, to hang on to her piece of the Lynx, which turns out to be a runaway hit. But that’s complicated by a surprise visitor from her home in Miami, a tenacious cop who is piecing everything together too quickly for Carmen, and the tangled web of secrets and resentments among the passionate eccentrics who write comics for a living.

Alex Segura uses his expertise as a comics creator as well as his unabashed love of noir fiction to create a truly one-of-a-kind novel–hard-edged and bright-eyed, gritty and dangerous, and utterly absorbing.

Copies of Secret Identity signed by the author are available for purchase through the Mark Twain Store; proceeds benefit The Mark Twain House & Museum. Books will be shipped after the event. We regret that we are NOT able to ship books outside the United States as it is cost-prohibitive to do so.

novels Dangerous Ends, Blackout. and Miami Midnight). His short story “Red Zone” won the 2020 Anthony Award for Best Short Story, and his border noir short story, “90 Miles” will be included in The Best American Mystery and Suspense 2021. “90 Miles” also won the Best Short Story Anthony Award for 2021. Alex has also written a number of comic books, most notably the superhero noir The Black Ghost, the YA music series The Archies, and the “Archie Meets” collection of crossovers, featuring real-life cameos from the Ramones, B-52s, the upcoming all-ages superhero adventure The Dusk, and more. He is also the co-creator/co-writer of the Lethal Lit crime/YA podcast from iHeart Radio, which was named one of the best podcasts of 2018 by The New York Times. By day he is the Senior Vice President of Sales and Marketing at Oni Press, with previous stints at Archie Comics and DC Comics. A Miami native, he lives in New York with his wife and children.

Mexican by birth, Canadian by inclination. Silvia Moreno-Garcia is the author of a number of critically acclaimed novels, including Gods of Jade and Shadow (Sunburst Award for Excellence in Canadian Literature of the Fantastic, Ignyte Award), Mexican Gothic (Locus Award, British Fantasy Award, Pacific Northwest Book Award, Aurora Award, Goodreads Award), and others.

She has edited several anthologies, including She Walks in Shadows (World Fantasy Award winner, published in the USA as Cthulhu’s Daughters). Silvia is the publisher of Innsmouth Free Press. She’s a columnist for The Washington Post.

She has an MA in Science and Technology Studies from the University of British Columbia. Her thesis can be read online and is titled “Magna Mater: Women and Eugenic Thought in the Work of H.P. Lovecraft.” She lives in Vancouver, British Columbia.