“SENTENCE: Ten Years and a Thousand Books in Prison” with Daniel Genis and Jacques Lamarre 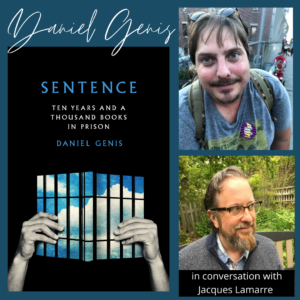 In 2003 Daniel Genis, the son of a famous Soviet émigré writer, broadcaster, and culture critic, was fresh out of NYU when he faced a serious heroin addiction that led him into debt and ultimately crime. After he was arrested for robbing people at knifepoint, he was nicknamed the “apologetic bandit” in the press, given his habit of expressing his regret to his victims as he took their cash. He was sentenced to twelve years—ten with good behavior, a decade he survived by reading 1,046 books, taking up weightlifting, having philosophical discussions with his fellow inmates, working at a series of prison jobs, and in general observing an existence for which nothing in his life had prepared him.

Genis describes in unsparing and vivid detail the realities of daily life in the New York penal system. In his journey from Rikers Island and through a series of upstate institutions he encounters violence on an almost daily basis, while learning about the social strata of gangs, the “court” system that sets geographic boundaries in prison yards, how sex was obtained, the workings of the black market in drugs and more practical goods, the inventiveness required for everyday tasks such as cooking, and how debilitating solitary confinement actually is—all while trying to preserve his relationship with his recently married wife.

Written with empathy and wit, Sentence is a strikingly powerful memoir of the brutalities of prison and how one man survived then, leaving its walls with this book inside him, “one made of pain and fear and laughter and lots of other books.”

Copies of SENTENCE signed by the author are available for purchase through the Mark Twain Store; proceeds benefit The Mark Twain House & Museum. Books will be shipped after the event. We regret that we are NOT able to ship books outside the United States as it is cost-prohibitive to do so.

Daniel Genis is the son of Russian immigrants who came to the USA in 1977; he was born the following year. His father is Alexander Genis, a well-known Russian public intellectual and author. Daniel attended Stuyvesant high school and NYU, graduating in 1999. He began a career in

publishing at the same time as selling blow and getting hooked on dope. He also read the entire corpus of writing from antiquity and was well into the Middle Ages when narcotics interfered. After a very desperate summer week in 2003, he was convicted of five counts of robbery and sent to prison for ten years. His time in Maximun Security as a New Yorker-reading smarty-pants and prison-yard weight lifter was good fodder for a journalistic career and the memoir SENTENCE; Ten Years & a Thousand Books in Prison. Today he’s been free and clean since his release in 2014 and lives with his wife Petra Szabo in Brooklyn, NY