“STATUS REVOLUTION: How the Lowbrow Became the Highbrow” with Chuck Thompson (Virtual) 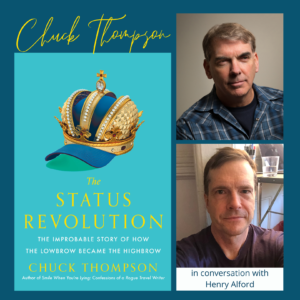 Chuck Thompson and Henry Alford will discuss Chuck’s new book Status Revolution: The Improbable Story of How the Lowbrow Became the Highbrow, which explains why everything we know about status is changing, upends centuries of conventional wisdom, and shows how the new status revolution reflects our place in contemporary society.

How did rescue dogs become status symbols? Why are luxury brands losing their cachet? What’s made F. Scott Fitzgerald’s most famous observations obsolete? The answers are part of a new revolution that’s radically reorganizing the way we view ourselves and others.

Status was once easy to identify—fast cars, fancy shoes, sprawling estates, elite brands. But in place of Louboutins and Lamborghinis, the relevance of the rich, famous, and gauche is waning and a riveting revolution is underfoot. Why do dog owners boast about their rescues, but quietly apologize for their purebreds? Why do people brag about their grinding workweeks? Why are so many billionaires anxious to give (some of) their money away rather than hoard it?

In The Status Revolution, Chuck Thompson—dubbed “savagely funny” by The New York Times and “wickedly entertaining” by the San Francisco Chronicle—sets out to determine what “status” means today and learns that what was once considered the low life has become the high life.

Copies of Status Revolution are available for purchase through the Mark Twain Store; proceeds benefit The Mark Twain House & Museum. Books will be shipped after the event. We regret that we are NOT able to ship books outside the United States as it is cost-prohibitive to do so.

ABOUT THE AUTHOR: Chuck Thompson is the author of the widely reviewed political screed Better Off Without ‘Em: A Northern Manifesto for Southern Secession, as well as the comic memoirs Smile When You’re Lying and To Hellholes and Back. He’s the creator, writer, and an executive producer of the 2022 Paramount+ documentary Sometimes When We Touch: The Reign, Ruin and Resurrection of Soft Rock. His writing has appeared in Outside, Politico, Esquire, Men’s Journal, The New Republic, and many other publications.

ABOUT THE MODERATOR: Journalist and humorist Henry Alford is the author of six books, including How to Live and Big Kiss, which won a Thurber Prize for American Humor award. He writes for the New Yorker.