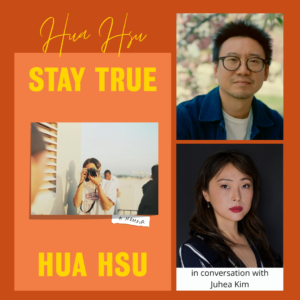 From the New Yorker staff writer Hua Hsu, STAY TRUE is a memoir on friendship and grief. At eighteen years old, Hua became friends with Ken—even though the only thing they had in common was that American culture doesn’t seem to have a place for either of them. Their friendship blossomed over three years until it came to a sudden stop with the death of Ken during a carjacking. Determined to hold on to all that was left of one of his closest friends—his memories—Hua turned to writing. STAY TRUE is the book he’s been working on ever since. FREE Virtual Event! REGISTER HERE.

Copies of STAY TRUE available for purchase through the Mark Twain Store; proceeds benefit The Mark Twain House & Museum. Books will be shipped after the event. We regret that we are NOT able to ship books outside the United States as it is cost-prohibitive to do so.

Hua Hsu is a staff writer at The New Yorker and a professor of literature at Bard College. Hsu serves on the executive board of the Asian American Writers’ Workshop. He was formerly a fellow at the New America Foundation and the Dorothy and Lewis B. Cullman Center at the New York Public Library. He lives in Brooklyn with his family.

Juhea Kim is a writer, artist, advocate, and editor of Peaceful Dumpling, a sustainable online magazine. Her bestselling debut novel Beasts of a Little Land (Ecco) was named a finalist for the 2022 Dayton Literary Peace Prize and a Best Book of 2021 by Harper’s Bazaar, Real Simple, Ms., and Portland Monthly. It will be published around the world in 2022. She earned her BA in Art and Archaeology from Princeton University.