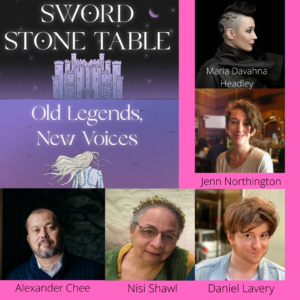 From the vast lore surrounding King Arthur, Camelot, and the Knights of the Round Table, comes an anthology of gender-bent, race-bent, LGBTQIA+ inclusive retellings. Here you’ll find the Lady of the Lake reimagined as an albino Ugandan sorceress and the Lady of Shalott as a wealthy, isolated woman in futuristic Mexico City; you’ll see Excalibur rediscovered as a baseball bat that grants a washed-up minor leaguer a fresh shot at glory and as a lost ceremonial drum that returns to a young First Nations boy the power and the dignity of his people. There are stories set in Gilded Age Chicago, ’80s New York, twenty-first century Singapore, and space; there are lesbian lady knights, Arthur and Merlin reborn in the modern era for a second chance at saving the world and falling in love—even a coffee shop AU. Brave, bold, and groundbreaking, the stories in Sword Stone Table will bring fresh life to beloved myths and give long-time fans a chance to finally see themselves in their favorite legends. 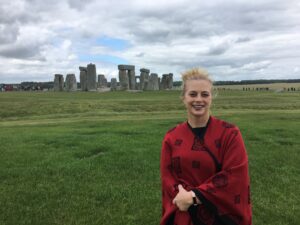 Professor Dorsey Armstrong—a specialist in medieval English literature—joined the Purdue faculty in 2002, where she currently serves as Head of the English Department. The holder of an A.B. in English and Creative Writing from Stanford University and a Ph.D. in Medieval Literature from Duke University, she also taught at Centenary College of Louisiana and at California State University, Long Beach. Her research interests include medieval women writers, late-medieval print culture, and the Arthurian legend, on which she has published extensively. In addition to numerous articles published in journals such as Exemplaria and Arthurian Literature, chapters in various academic books, and serving as co-editor for several scholarly essay collections, she is the author of Gender and the Chivalric Community in Malory’s Morte d’Arthur (University Press of Florida, 2003), Sir Thomas Malory’s Morte Darthur: A New Modern English Translation Based on the Winchester Manuscript (Parlor Press, 2009) and Mapping Malory: Regional Identities and National Geographies in Le Morte Darthur (Palgrave Macmillan, 2014; co-authored with Kenneth Hodges). In January 2009, she became editor-in-chief of the academic journal Arthuriana, which publishes the most cutting-edge research on the legend of King Arthur, from its medieval origins to its enactments in the present moment.

Winner of numerous teaching awards—including Purdue’s Murphy Award for Excellence in Undergraduate Instruction—Professor Armstrong has also written and taped several lecture series for The Teaching Company/The Great Courses. These include: “The Medieval World”; “Turning Points in Medieval History”; “Analysis and Critique: How to Engage With and Write About Anything”; “Great Minds of the Medieval World”; “1215: A Year That Changed History”; “King Arthur: History and Legend”; and “The Black Death: the World’s Most Devastating Plague.” Additionally, she has produced two short lecture series for Audible–one on “Powerful Medieval Women” and another on “Medieval Myths and Mysteries.” She currently sits on the executive and advisory boards for numerous scholarly and academic entities, the Bonnie Wheeler Fellowship, and the International Arthurian Society. She is currently at work editing a volume on Approaches to Teaching the Arthurian Tradition for the Modern Language Association.