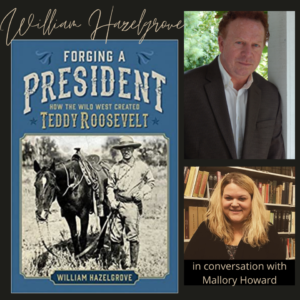 Historian and author William Hazelgrove lights out for the territories with FORGING A PRESIDENT: How the Wild West Created Teddy Roosevelt. Joining him in conversation will be MTH&M Assistant Curator Mallory Howard.

“There are few sensations I prefer to that of galloping over these rolling limitless prairies, with rifle in hand, or winding my way among the barren, fantastic and grimly picturesque deserts of the so-called Bad Lands.” —Theodore Roosevelt

He was born a city boy in Manhattan; but it wasn’t until he lived as a cattle rancher and deputy sheriff in the wild country of the Dakota Territory that Theodore Roosevelt became the man who would be president. “I have always said I would not have been president had it not been for my experience in North Dakota,” Roosevelt later wrote. It was in the “grim fairyland” of the Bad Lands that Roosevelt became acquainted with the ways of cowboys, Native Americans, trappers, thieves, and wild creatures–and it was there that his spirit was forged and tested.

In Forging a President, author William Hazelgrove uses Roosevelt’s own reflections to immerse readers in the formative seasons that America’s twenty-sixth president spent in “the broken country” of the Wild West.

Copies of Forging a President signed by the author are available for purchase through the Mark Twain Store; proceeds benefit The Mark Twain House & Museum. Books will be shipped after the event. We regret that we are NOT able to ship books outside the United States as it is cost-prohibitive to do so.

William Hazelgrove is the national bestselling author of ten novels and seven nonfiction titles. His books have received starred reviews in Publisher Weekly, Kirkus, Booklist, Book of the Month Selections, ALA Editors Choice Awards Junior Library Guild Selections, Literary Guild Selections, History Book Club Selections and optioned for the movies. He was the Ernest Hemingway Writer in Residence where he wrote in the attic of Ernest Hemingway’s birthplace. He has written articles and reviews for USA Today, The Smithsonian Magazine, and other publications and has been featured on NPR All Things Considered. The New York Times, LA Times, Chicago Tribune, CSPAN, USA Today have all covered his books with features. His books Tobacco Sticks, (represented by Joel Gotler) The Pitcher, Real Santa, and Madam President have been optioned for screen and television rights. His book Madam President: The Secret Presidency of Edith Wilson is currently in development. The option on The Pitcher was fully executed when the script was approved. His other books include Sally Rand American Sex Symbol, Morristown: The Kidnapping of George Washington, Greed in the Gilded Age: The Brilliant Con of Cassie Chadwick, and One Hundred and Sixty Minutes, The Race to Save the Titanic.