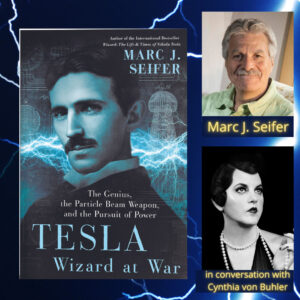 Marc J. Seifer, author of the award-winning international bestseller WIZARD: The Life & Times of Nikola Tesla, delves deeper into the groundbreaking ideas and astonishing mind of one of the greatest geniuses of modern times with author and artist Cynthia von Buhler (MINKY WOODCOCK: The Girl Who Electrified Tesla).

“In a few years hence, it will be possible for nations to fight without armies, ships or guns, by weapons far more terrible to the destructive action and range of which there is virtually no limit. Any city at any distance whatsoever from the enemy can be destroyed by him and no power on Earth can stop him from doing so.” —Nikola Tesla, circa 1925

From Tesla’s role in the origins of Star Wars technology and his dynamic theory of gravity, to the real purpose behind the iconic tower at Wardenclyffe, this is an eye-opening account of Tesla’s projects, passions, and ambitions—and an illuminating, important study of one of history’s most intriguing figures.

Copies of Tesla: Wizard at War are available for purchase through the Mark Twain Store; proceeds benefit The Mark Twain House & Museum. Books will be shipped after the event. We regret that we are NOT able to ship books outside the United States as it is cost-prohibitive to do so.

Marc J. Seifer, PhD has been a handwriting expert for more than 35 years and was editor-in-chief of The Journal of the American Society of Professional Graphologists for more than a decade. He has worked for the Rhode Island Attorney General’s Office and Crime Laboratory, the Department of Defense, Undersea Warfare, United Parcel Service, and numerous banks, insurance agencies, and lawyers. He was featured on the History Channel discussing the Howard Hughes Mormon Will and on Associated Press International TV on the handwriting of bin Laden and on PBS American Experience discussing Nikola Tesla. He has lectured at Oxford University, Cambridge University, Brandeis, Cranbrook Retreat, and numerous conferences around the world. Featured in The New York Times, Wall Street Journal, The Washington Post and MIT’s Technology Review, his articles have appeared in Wired, Civilization, The Historian, Extraordinary Science and Psychiatric Clinics of North America.

Having lived an extraordinary life in a variety of fields, Marc set out to fictionalize his interests and aspects of his life in THE RUDY STYNE QUADRILOGY, four novels spanning over 30 years of writing including Rasputin’s Nephew, Doppelganger, Crystal Night, and Fate Line.

A retired teacher of psychology and forensic graphology at Roger Williams University in Bristol, Rhode Island, his book WIZARD: THE LIFE & TIMES OF NIKOLA TESLA: BIOGRAPHY OF A GENIUS, translated into nine languages has been called “Revelatory” by Publisher’s Weekly (a boxed and starred review), “Serious Scholarship” by Scientific American, a “Masterpiece” by Nelson DeMille and is “Highly Recommended” by the American Association for the Advancement of Science.