All proceeds benefit the restoration, preservation, and education programs of The Mark Twain House & Museum.

A limited number of people are allowed inside the Austin House’s at any given time. The last tour is at 2:45 p.m. without exception.

A Big Thank You to Our Sponsors: 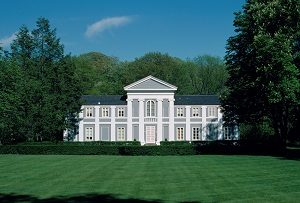 Austin House, 130 Scarborough Street, Hartford
The Austin House, a National Historic Landmark, was built in 1930 on Scarborough Street in Hartford, for the Wadsworth Atheneum Museum of Art’s legendary director A. Everett “Chick” Austin and his wife Helen. Modeled after a grand 16th-century villa near Venice, which they had seen on their wedding trip in 1929, the house is 86 feet wide and a mere 18 feet deep. The first floor is decorated in 18th-century Rococo style, with silk-covered walls, gilded and painted furniture, and a spectacular Bavarian alcove. During the 1930s the Austin House was a gathering place for leaders of the international art world–Salvador Dalí, Alexander Calder, George Balanchine, Virgil Thomson, Aaron Copeland, and more. Because Chick Austin was completely in tune with the cultural forces of his time, he was able to make Hartford a center for the transformation of the arts in America. The family resided in the house until 1985 and then gave it to the Wadsworth Atheneum. The entrance to the house and a tour of the first floor involves use of stairs; no ramps are available. 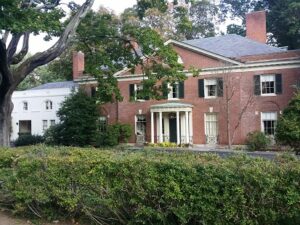 James Northrop, 10 Woodside Circle, Hartford
This Greek revival home, built in 1925, was designed by Phillip Lipincott Goodwin for his brother’s family. The home has 16 rooms, 7 bathrooms, and 6 fireplaces. The entry vestibule opens to a grand hallway running through the center of the house to French doors that open to a garden terrace. Turning right you enter the living room with floor to ceiling windows, a hand carved, paneled, fireplace and French doors leading to the octagonal solarium. Visitors walk thru the solarium into the library and down the hall to the dining room. It has antique French wallpaper depicting Captain Cook’s landing in Hawaii and its marble fireplace was recovered from an 18th century French chateau. Other interesting features are a marble floored butler’s pantry, an elevator, an annunciator system with buttons in each of the main rooms to summon servants, a walk-in safe, and a kitchen and larder which are original to the house. The current owner has furnished the home with an extensive art collection, antique furniture and chandeliers which complement the gracious spaces while still creating a very comfortable home. 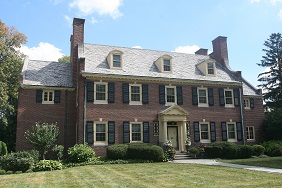 Robyn and Jonathan Gengras, 70 Terry Road, Hartford
Like the Governor’s Mansion one street away, the Gengras home at 70 Terry Road, built in 1929, was designed by the prestigious firm of Smith & Bassette. Its elegant proportions speak of the Colonial Revival: dormers, double chimneys and a Palladian doorway. The compact intimacy and compactness of a Colonial residence is felt as you enter below a snug stairway leading to a gallery above, but then the space opens into a wide hall, and in front of you is the brightness of French doors leading to the back garden. A spacious living room is done in light tones, with furniture that combines classicism with comfort. Two 18th-century British topographical prints flank the fireplace. Nearby is a dining room in green subdued tones. The dining room furniture is classic with green walls and bamboo chairs and the ceiling lights and sconces have recently been updated. The kitchen is flanked by a charming butler’s pantry and off the kitchen is an airy breakfast room. Remarkably, the present family is only the third to live here. 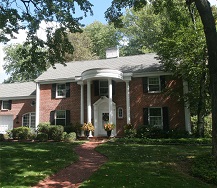 Dr. Tracy Brennan Graham and Dr. Neville Graham, 64 Norwood Road, West Hartford
This stately colonial-style, four-bedroom home was built in 1943 by Love Brothers Builders. To the left of the foyer is a wonderful family kitchen and dining area. The centerpiece for the holidays is the kitchen themed tree complete with miniature sweets and tiny kitchen utensils. Continue through the kitchen to the greenhouse room where you are transformed to Christmas in the islands with a tree and decorations complete with shells, starﬁsh and a seaside theme. In the formal dining room there is a collection of Lladro angels adorning the dining room table, while two Christmas trees sparkle with a magniﬁcent assortment of Waterford ornaments. To the left of the living room with its life sized Santa, the sunroom has been completely transformed into a miniature Christmas Village. The Christmas spirit continues upstairs with the tree in the front window hung with family pictures. In the girl’s bedroom you are transformed to a bygone era with a tree decorated with Victorian dolls and then back to the present with a “sports themed” tree in the back foyer. 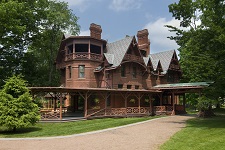 The Mark Twain House, 351 Farmington Avenue, Hartford
Samuel Langhorne Clemens — Mark Twain –lived in this 25-room Victorian mansion from 1874 to 1891 with his wife, Livy, and their daughters Susy, Clara, and Jean. Twain wrote some of his major works during these years, including Adventures of Huckleberry Finn and A Connecticut Yankee in King Arthur’s Court.

The house, designed by Edward Tuckerman Potter, is decorated with garlands and ornaments for the holiday season, much as it would have been in the 1880s. A Santa Claus suit draped on a chair in the billiard room nods to Twain’s playing Santa for his daughters. The newly restored Mahogany Suite is resplendent with “honeycomb” design wallpaper by Candace Wheeler, the first female interior decorator in the United States.

The suite is displayed in its Clemens-era holiday role – as a place for Livy to wrap gifts, including charitable gifts. “We drove around with the coachman while he delivered Christmas packages that went to the poor,” daughter Clara recalled, “…wrapped in mufflers and snugly tucked in a fur robe.”

Tickets can also be purchased at the following merchants:

Tickets on the day of the tour are $35 and can be purchased at The Mark Twain House & Museum or another house with cash or check.

No tickets will be sold at the Austin House.