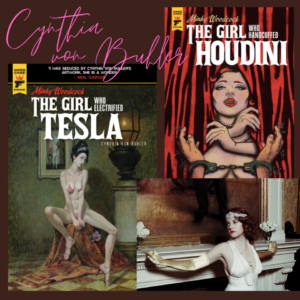 In 2012, The Mark Twain House & Museum was honored to present “The Countess & Her Cats,” an exhibition featuring the children’s book models of Cynthia von Buhler. A decade later, we are delighted to welcome von Buhler in conversation with playwright Jacques Lamarre on something decidedly more grown-up, her sexy and thrilling Minky Woodcock graphic novels.

Minky Woodcock: The Girl Who Electrified Tesla is set during World War II, nearly two decades after the events of the first volume. Based around lesser-known facts dug up by von Buhler, fictional Minky Woodcock partners with Josephine Baker as they outwit Nazi Otto Skorzency, the greedy JP Morgan family, and government officials, such as John Trump, Donald Trump’s scientist uncle, in the race to find Nikola Tesla’s mysterious weapon of mass destruction.

Copies of both The Girl Who Handcuffed Houdini and The Girl Who Electrified Tesla signed by the author are available for purchase through the Mark Twain Store; proceeds benefit The Mark Twain House & Museum. Books will be shipped after the event. We regret that we are NOT able to ship books outside the United States as it is cost-prohibitive to do so.

Cynthia von Buhler is an award-winning American artist, author, and animal activist. In her career, she has written and illustrated books for children and adults; created, produced, and directed multi-year theatrical productions; exhibited her art in galleries around the world; made street art installations; staged and promoted outrageous parties; fronted rock bands live and on recordings; managed a record label; appeared on television shows, radio interviews, and podcasts. She is currently focused on graphic novels, reportage illustration, and animal rescue work.