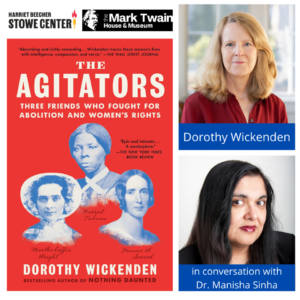 Harriet Beecher Stowe Center and The Mark Twain House & Museum proudly present Dorothy Wickenden, author of Nothing Daunted and executive editor of The New Yorker, in conversation with Dr. Manisha Sinha, Draper Chair of American History at the University of Connecticut, on THE AGITATORS: Three Friends Who Fought for Abolition and Women’s Rights.

In the 1850s, Harriet Tubman, strategically brilliant and uncannily prescient, rescued some seventy enslaved people from Maryland’s Eastern Shore and shepherded them north along the underground railroad. One of her regular stops was Auburn, New York, where she entrusted passengers to Martha Coffin Wright, a Quaker mother of seven, and Frances A. Seward, the wife of William H. Seward, who served over the years as governor, senator, and secretary of state under Abraham Lincoln. During the Civil War, Tubman worked for the Union Army in South Carolina as a nurse and spy, and took part in a spectacular river raid in which she helped to liberate 750 slaves from several rice plantations. Wright, a “dangerous woman” in the eyes of her neighbors, worked side by side with Elizabeth Cady Stanton and Susan B. Anthony to organize women’s rights and anti-slavery conventions across New York State, braving hecklers and mobs when she spoke. Frances Seward, the most conventional of the three friends, hid her radicalism in public, while privately acting as a political adviser to her husband, pressing him to persuade President Lincoln to move immediately on emancipation.

The Agitators opens in the 1820s, when Tubman is enslaved and Wright and Seward are young homemakers bound by law and tradition, and ends after the war. Many of the most prominent figures of the era—Lincoln, William H. Seward, Frederick Douglass, Daniel Webster, Charles Sumner, John Brown, William Lloyd Garrison—are seen through the discerning eyes of the protagonists. So are the most explosive political debates: about the civil rights of African Americans and women, about the enlistment of Black troops, and about opposing interpretations of the Constitution. Through richly detailed letters from the time and exhaustive research, Wickenden traces the second American revolution these women fought to bring about, the toll it took on their families, and its lasting effects on the country. Riveting and profoundly relevant to our own time, The Agitators brings a vibrant, original voice to this transformative period in our history.

Signed copies of The Agitators are available for purchase through the Mark Twain Store; proceeds benefit The Mark Twain House & Museum. Books will be shipped after the event. We regret that we are NOT able to ship books outside the United States as it is cost-prohibitive to do so.

ABOUT THE AUTHOR: Dorothy Wickenden is the author of Nothing Daunted and The Agitators and has been the executive editor of The New Yorker since January 1996. She also writes for the magazine and is the moderator of its weekly podcast The Political Scene. A former Nieman Fellow at Harvard, Wickenden was national affairs editor at Newsweek from 1993-1995, and before that was the longtime executive editor at The New Republic. She lives with her husband in Westchester, New York.

ABOUT THE MODERATOR: Dr. Manisha Sinha is the James L. and Shirley A. Draper Chair in American History at the University of Connecticut and a leading authority on the history of slavery and abolition and the Civil War and Reconstruction. She was born in India and received her Ph.D from Columbia University where her dissertation was nominated for the Bancroft prize. She is the author of The Counterrevolution of Slavery: Politics and Ideology in Antebellum South Carolina, which was named one of the ten best books on slavery in Politico in 2015 and recently featured in The New York Times’ 1619 Project. Her multiple award winning second monograph The Slave’s Cause: A History of Abolition was long listed for the National Book Award for Non Fiction. It was named Editor’s Choice in The New York Times Book Review, book of the week by Times Higher Education to coincide with its UK publication, and one of three great History books of 2016 in Bloomberg News. She is the recipient of numerous fellowships, including two yearlong research fellowships from the National Endowment for the Humanities as well as two from the Mellon Foundation. She is the Eighth recipient of the James W.C. Pennington Award for 2021 from the University of Heidelberg, Germany. In 2018, she was a Visiting Professor at the University of Paris, Diderot and was elected to the Society of American Historians. She is a member of the Board of the Society of Civil War Historians and of the Council of Advisors of the Lapidus Center for the Historical Analysis of Transatlantic Slavery at the Schomburg, New York Public Library. She taught at the University of Massachusetts, Amherst for over twenty years, where she was awarded the Chancellor’s Medal, the highest recognition bestowed on faculty. She is currently writing a book on the “greater reconstruction” of American democracy after the Civil War, which is under contract with Liveright (Norton).

Professor Sinha has been interviewed by the national and international press. She has been on National Public Radio, NBC, Democracy Now, BBC News, C-SPAN, Pacifica, Euro News, Canadian Television News, Canadian Broadcasting Company, Australian Broadcasting Corporation, China Global News, Jon Stewart’s The Daily Show, TLC’s Who Do You Think You Are, and was an advisor and on-screen expert for the Emmy nominated PBS documentary, The Abolitionists (2013), which is a part of the NEH funded Created Equal series. She has lectured all over the country and internationally in the UK, Canada, France, Germany, Italy, Spain, Australia, India, Ireland, and New Zealand. The Chinese rights to The Slave’s Cause have recently been sold to Beijing Han Tang Zhi Dao Book Distribution Co., Ltd.