The Alchemy of Us: Scientist Ainissa Ramirez in conversation with Christine Lawlor-King 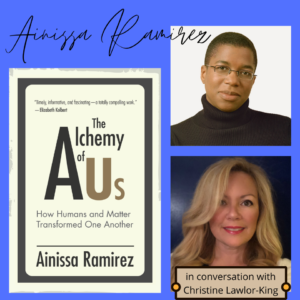 In The Alchemy of Us, scientist and science writer Ainissa Ramirez examines eight inventions—clocks, steel rails, copper communication cables, photographic film, light bulbs, hard disks, scientific lab-ware, and silicon chips—and reveals how they shaped the human experience. Ramirez tells the stories of the woman who sold time, the inventor who inspired Edison, and the hotheaded undertaker whose invention pointed the way to the computer. She describes, among other things, how our pursuit of precision in timepieces changed how we sleep; how the railroad helped commercialize Christmas; how the necessary brevity of the telegram influenced Hemingway’s writing style; and how a young chemist exposed the use of Polaroid’s cameras to create passbooks to track black citizens in apartheid South Africa. These fascinating and inspiring stories offer new perspectives on our relationships with technologies.

Signed copies of The Alchemy of Us will be available for purchase through the Mark Twain Store; proceeds benefit The Mark Twain House & Museum. Books will be shipped after the event. We regret that we are NOT able to ship books outside the United States as it is cost-prohibitive to do so.

Ainissa Ramirez, Ph.D. is an award-winning scientist and science communicator, who is passionate about getting the general public excited about science. A graduate of Brown University, she earned her doctorate in materials science and engineering from Stanford. Dr. Ramirez started her career as a scientist at Bell Laboratories in Murray Hill, New Jersey, and later worked as an associate professor of mechanical engineering at Yale. She authored the books The Alchemy of Us and Save Our Science, and co-authored Newton’s Football. She has written for Forbes, Time, The Atlantic, Scientific American, American Scientist, and Science and has explained science headlines on CBS, CNN, NPR, ESPN, and PBS.

Christine Lawlor-King is the Executive Director of the Connecticut Invention Convention. In her position, she trains educators on how to incorporate invention education into their curriculum and programming. Christine has been training teachers for quite some time now as the Invention Education Programming Manager for Lemelson MIT and the Invention Convention Worldwide Program Manager for The Henry Ford Museum. Christine has over fifteen years teaching STEAM and invention education and managing invention education programming. Her award winning STEAM program, when she was teaching in the classroom, led her district to create a position for her as the first districtwide STEAM Coach. Christine has mentored young inventors, educators, administrators, and corporate professionals, which recently earned her the STEMConnector Award Community Trailblazer. Christine loves bringing invention education program to more school, more teachers, and more children. Her passion for introducing youth to STEAM careers started when she was working in the lab as a microbiologist.