THE AMERICAN EXPERIMENT: A Virtual Breakfast with David Rubenstein and Dr. Christina Greer 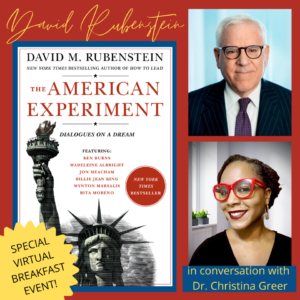 Start your day with our first-ever virtual breakfast conversation! Perk some coffee, butter your toast, and dig into a dynamic conversation between David Rubenstein and Dr. Christina Greer discussing Rubenstein’s new book, The American Experiment: Dialogues on a Dream.

David M. Rubenstein—visionary cofounder of The Carlyle Group, and host of Bloomberg TV’s The David Rubenstein Show and Bloomberg Wealth—has long dedicated himself to interviewing some of the world’s greatest minds and highest performing leaders. In The American Story, Rubenstein brought us conversations from the nation’s most revered historians on critical lessons from American history. In How to Lead, he distilled conversations with the world’s most successful leaders into an essential leadership playbook.

Rubenstein explores our grand national experiment in democracy, culture, innovation, and ideas, revealing the setbacks, suffering, invention, ingenuity, and social movements that continue to shape our vision of what America is—and what it can be. The American Experiment explores the diverse make-up of our country’s DNA thorough interviews with Pulitzer Prize–winning historians, diplomats, music legends, and sports giants, including Jill Lepore, Madeleine Albright, Ken Burns, Henry Louis Gates, Jr. Elaine Weiss, Jon Meacham, Walter Isaacson, David McCullough, John Barry, Paul Simon, Wynton Marsalis, Billie Jean King, and Rita Moreno. The American Experiment is a beacon of light in an era of extraordinary challenges, reminding us that our country has been tested before, and will be tested again.

Signed copies of The American Experiment are available for purchase through the Mark Twain Store; proceeds benefit The Mark Twain House & Museum. Books will be shipped after the event. We regret that we are NOT able to ship books outside the United States as it is cost-prohibitive to do so.