The Amistad Center and The MTH&M present Kerri Greenidge on THE GRIMKES: THE LEGACY OF SLAVERY IN AN AMERICAN FAMILY (Virtual) 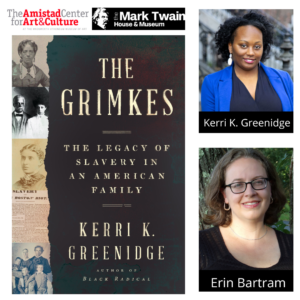 In conjunction with the U.N. International Day to Abolish Slavery, the Amistad Center for Art & Culture and The MTH&M present Tufts Professor Kerri K Greenidge on THE GRIMKES: A LEGACY OF SLAVERY IN AN AMERICAN FAMILY with MTH&M Education Program Coordinator Dr. Erin Bartram.

Sarah and Angelina Grimke—the Grimke sisters—are revered figures in American history, famous for rejecting their privileged lives on a plantation in South Carolina to become firebrand activists in the North. Their antislavery pamphlets, among the most influential of the antebellum era, are still read today. Yet retellings of their epic story have long obscured their Black relatives. In The Grimkes, award-winning historian Kerri Greenidge presents a parallel narrative, indeed a long-overdue corrective, shifting the focus from the white abolitionist sisters to the Black Grimkes and deepening our understanding of the long struggle for racial and gender equality.

In a grand saga that spans the eighteenth century to the twentieth and stretches from Charleston to Philadelphia, Boston, and beyond, Greenidge reclaims the Black Grimkes as complex, often conflicted individuals shadowed by their origins. Most strikingly, she indicts the white Grimke sisters for their racial paternalism. They could envision the end of slavery, but they could not imagine Black equality: when their Black nephews did not adhere to the image of the kneeling and eternally grateful slave, they were cruel and relentlessly judgmental—an emblem of the limits of progressive white racial politics.

A landmark biography of the most important multiracial American family of the nineteenth century, The Grimkes suggests that just as the Hemingses and Jeffersons personified the racial myths of the founding generation, the Grimkes embodied the legacy—both traumatic and generative—of those myths, which reverberate to this day.

Copies of THE GRIMKES are available for purchase through the Mark Twain Store; proceeds benefit The Mark Twain House & Museum. Books will be shipped after the event. We regret that we are NOT able to ship books outside the United States as it is cost-prohibitive to do so.

Kerri K. Greenidge is a historian at Tufts University and the author of Black Radical: The Life and Times of William Monroe Trotter, winner of the 2020 Mark Lynton History Prize, among other honors. She lives in Westborough, Massachusetts.

Erin Bartram has been the School Programs Coordinator at The Mark Twain House & Museum since 2019. She earned her Ph.D. at the University of Connecticut in 2015 and taught for three years at the University of Hartford before joining the museum. She is co-founder and editor of Contingent Magazine, and co-editor of the Rethinking Careers, Rethinking Academia series for the University Press of Kansas. Her work has appeared in the Washington Post, the Chronicle of Higher Education, U.S. Catholic Historian, and Religion & American Culture.

ABOUT THE AMISTAD CENTER

​In addition to collection care and development, The Amistad Foundation was intended to take on the broader tasks of preserving and interpreting African American culture and history and correcting the misrepresentation and under-representation of this important aspect of our country’s evolution.