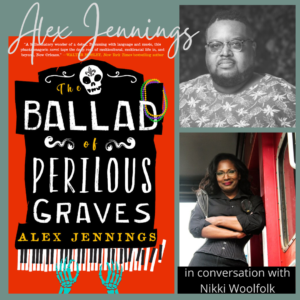 In a fantastical version of New Orleans where music is magic, a battle for the city’s soul brews between two young mages, a vengeful wraith, and one powerful song in this vibrant and imaginative debut.

Nola is a city full of wonders. A place of sky trolleys and dead cabs, where haints dance the night away and Wise Women keep the order, and where songs walk, talk and keep the spirit of the city alive. To those from Far Away, Nola might seem strange. To failed magician, Perilous Graves, it’s simply home. Then the rhythm stutters.

Nine songs of power have escaped from the magical piano that maintains the city’s beat and without them, Nola will fail. Unexpectedly, Perry and his sister, Brendy, are tasked with saving the city. But a storm is brewing and the Haint of All Haints is awake. Even if they capture the songs, Nola’s time might be coming to an end.

Signed copies of THE BALLAD OF PERILOUS GRAVES are available for purchase through the Mark Twain Store; proceeds benefit The Mark Twain House & Museum. Books will be shipped after the event. We regret that we are NOT able to ship books outside the United States as it is cost-prohibitive to do so.

Alex Jennings is a writer/editor/teacher/poet living in New Orleans. He was born in Wiesbaden (Germany) and raised in Gaborone (Botswana), Tunis (Tunisia), Paramaribo (Surinam) and the United States. He constantly devours pop culture and writes mostly jokes on Twitter (@magicknegro). He loves music, film, comix, and even some TV. He’s going a little nuts shut up in his Central City apartment, but thankfully he has two of the best roommates on earth (one of whom is a beautiful beautiful dog named Karate Valentino. His debut novel, The Ballad of Perilous Graves is due out from Redhook in 2022. You can also find him goofing around on Instagram: (@magicknegro)

Mx. Nikki Woolfolk (They/Them) is a professional chocolatier, published author of short and long fiction, a public speaker, and a fixture within certain fandom and convention-based communities. Proud Blerd and self-proclaimed Kween of the Side-Eye, award-winning author Nikki Woolfolk sculpts decadent desserts and fantastical fiction with equal skill and flair.

Their goal is to bridge the gap between joie de vivre, of fandom and geeky things, and the prestige and know-how of culinary community. When they are not playing a never-ending game of “what if” in a writing space that’s part DieselPunk, part Willy Wonka, they’re drawing on their former STEM career and collection of quirky experiences to work up new recipes in their kitchen (tasting encouraged), designing their Goth-inspired garden (tasting decidedly DISCOURAGED), and mashing up real and fictional worlds on social media (virtual kitchen table is always open). Join their cogged-and-geared world at NikkiWoolfolk.com.