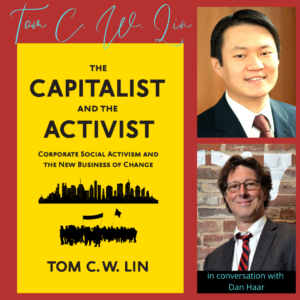 The Mark Twain house & Museum welcomes Professor Tom Lin joined in conversation by columnist and associate editor Dan Haar to discuss Professor Lin’s new book THE CAPITALIST AND THE ACTIVIST and the emerging future of activism, business, and politics.

THE CAPITALIST AND THE ACTIVIST weaves deep research and fascinating stories that span business, entertainment, history, science, and politics to provide an insightful road map for how society arrived at the current sea change in business and activism and a practical compass for moving forward. Drawing together examples from the civil rights movement, campaign finance litigation, gun regulation, Black Lives Matter, the Confederate flag controversy, the Trump presidency, and other historical events, Professor Lin brilliantly reveals and charts the course for a changing society of capitalists and activists seeking both profit and progress.

Copies of The Capitalist and the Activist signed by the author are available for purchase through the Mark Twain Store; proceeds benefit The Mark Twain House & Museum. Books will be shipped after the event. We regret that we are NOT able to ship books outside the United States as it is cost-prohibitive to do so.

Tom C.W. Lin is the Jack E. Feinberg Chair Professor of Law at Temple University’s Beasley School of Law and an Academic Fellow at George Washington University’s Center for Law, Economics & Finance with research and teaching expertise in the areas of business organizations, corporate governance, and financial technology. Professor Lin and his scholarship has been cited and published by numerous leading journals and his expertise has been featured in major media outlets like The Wall Street Journal, The Washington Post, Bloomberg News, Fortune, CNN, and The Financial Times. His research has been cited and recognized by courts and regulators around the world.

Prior to entering academia, Professor Lin practiced law at the New York State Office of the Attorney General and Davis Polk & Wardwell in New York City.

Dan Haar is Columnist and Associate Editor at Hearst Connecticut Media, writing about the intersection of business, public policy and politics and how the issues affect the people of Connecticut.