THE CASE OF THE MURDEROUS DR. CREAM: The Hunt for a Victorian Era Serial Killer 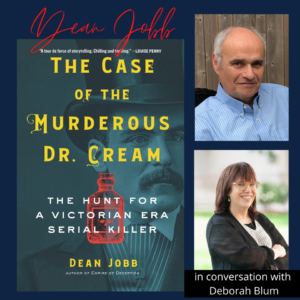 This is the true story of a Victorian Era monster, the ruthless “Lambeth Poisoner.” Author/researched Dean Jobb’s The Case of the Murderous Dr. Cream is the first complete account of his crimes, his victims, and how Scotland Yard’s best detectives struggled to end his final and deadliest attacks. It explores why the authorities in the United States, Canada and Britain failed to identify and stop one of the earliest and most prolific serial killers of modern times. It exposes the flawed police investigations and primitive forensic tests that enabled him to evade suspicion and detection, how he was convicted and imprisoned in the midst of his poisoning spree, and why he was freed to kill again. And it shows how the stifling morality and hypocrisy of Victorian society allowed him to prey on vulnerable and desperate women, many of whom had turned to him for medical help.

Jobb will be in conversation with Deborah Blum, the Pulitzer Prize-winning author of The Poisoner’s Handbook.

Signed copies of The Case of the Murderous Dr. Cream will be available for purchase through the Mark Twain Store; proceeds benefit The Mark Twain House & Museum. Books will be shipped after the event. We regret that we are NOT able to ship books outside the United States as it is cost-prohibitive to do so.

Dean Jobb is an award-winning author and journalist and a professor at the University of King’s College in Halifax, Nova Scotia, where he teaches in the Master of Fine Arts in Creative Nonfiction program. He specialize in true crime and my monthly column on the genre, “Stranger Than Fiction,” appears in Ellery Queen’s Mystery Magazine. My articles and book reviews appear in CrimeReads, Inside History magazine, the Chicago Review of Books and the Washington Independent Review of Books. During his 35-year career as a newspaper staff writer and freelance journalist. Jobb has written features and commentaries on an array of subjects – history, current events, law, business, politics, media ethics, science, travel, and the craft of nonfiction. For a full rundown of his book, academic and journalism experience, please visit www.deanjobb.com

Deborah Blum, director of the Knight Science Journalism program at MIT and the publisher of Undark magazine, is a Pulitzer-Prize winning science journalist, columnist and author of six books, most recently, The Poison Squad, a 2018 New York Times Notable Book. That book, as with all her most recent books, focuses on influential moments in the history of science. Others include the New York Times bestseller, The Poisoner’s Handbook (2010),  to Ghost Hunters (2006) and Love at Goon Park (2002). A co-editor of two editions of A Field Guide for Science Writers, she is now under contract with Oxford University Press as a co-editor of a forthcoming guide to science journalism. She has worked as a science columnist for The New York Times, a blogger for Wired, and has written for other publications ranging from The Wall Street Journal to Mother Jones, The Guardian to Lapham’s Quarterly. Her work has been anthologized in Best American Science Writing, Best American Nature Writing, and Best Science On-Line.

Before joining MIT in the summer of 2015, she was the Helen Firstbrook Franklin Professor of Journalism at the University of Wisconsin-Madison, a position she held for 18 years. Previously, she worked at five different newspapers, including as a  staff science writer for The Sacramento Bee, where she won the Pulitzer in 1992 for her reporting on ethical issues in primate research.  She received her ABJ from the University of Georgia in 1976 and her MA from the University of Wisconsin-Madison’s School of Journalism in Mass Communication in 1982.